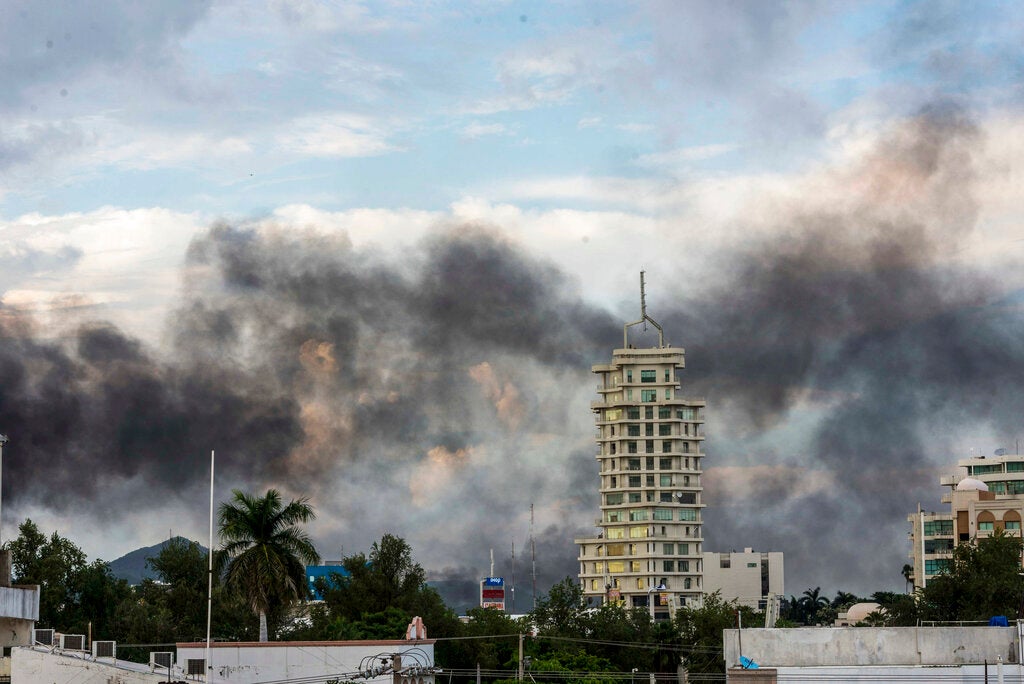 This Oct. 17, 2019 photo shows clouds of smoke from burning cars mar the skyline of Culiacan, Mexico. The Mexican city lived under drug cartel terror for 12 hours as gang members forced the government to free a drug lord. (AP)

MEXICO CITY  — Mexicans were divided Monday over whether the government did the right thing in releasing a drug kingpin’s son after his supporters shot up the northern city of Culiacán.

Some polls indicate the public is split on whether people accepted the government’s argument that it was more important to save lives than to arrest Ovidio Guzmán, the son of imprisoned drug lord Joaquin “El Chapo” Guzmán.

The weaponry seized after Thursday’s clashes suggested the death toll could have been very high had the government tried to hold on to Ovidio Guzmán after the military patrol that detained him was surrounded by Sinaloa cartel gunmen. Government forces seized a powerful, belt-fed machine gun, seven hand grenades, eight assault rifles and 20 vehicles.

Some cartel gunmen even surrounded and opened fire on the housing complex where soldiers’ families live, and after a few hours, the patrol was ordered by superiors to release Guzmán.

In Culiacán, where terrified residents dove to the floor or hid behind walls to escape the hail of gunfire, many breathed a sigh of relief that the government had relented.

Ayala said that while the city’s residents were subjected to a few hours of terror Thursday as cartel gunmen burned vehicles, blocked roads and shot at police and soldiers, the Sinaloa cartel “normally doesn’t attack the general public.”

Since then, the government has sent more elite troops to Culiacán, and Ayala said some people fear they may try to capture Guzmán again after the humiliation and attacks the army suffered Thursday.

“I don’t think they will just let that go,” he said.

Indeed, the military appeared to have been stung. Videos purportedly made by soldiers were posted on social media over the weekend calling the cartel gunmen “cowards.”

On Monday, U.S. Ambassador Christopher Landau met with Mexican public safety secretary Alfonso Durazo and leaders of the security forces to discuss cooperation aimed at reducing the number of guns illegally entering Mexico from the United States. The subject had come up in a phone call from U.S. President Donald Trump to President Andrés Manuel López Obrador on Saturday.

Mexico has tried to leverage its success in reducing immigration to the U.S. border into a commitment from U.S. authorities to make a greater effort to reduce the flow of guns that are illegal in Mexico. The Culiacan shooting involved an impressive arsenal of weaponry that rivaled what Mexican authorities carried.

Other voices continued to condemn the government’s decision as a capitulation to drug cartels.

“The rule of law has given way to the rule of force,” said Luis Gonzalez Perez, head of the country’s National Human Rights Commission.

“Authorities who give up doing their job because of some individuals’ resistance, that is the best recipe for continuing impunity and perpetuating violence,” Gonzalez Perez added.

Marko Cortes, leader of the opposition National Action Party, said that “the Mexican government was subjugated, forced to its knees, humiliated by a drug cartel.”

“By freeing the son of Chapo Guzmán, the Mexican people were condemned to suffering greater threats to their lives, peace and property,” Cortes said. “Sinaloa and other states were condemned to being ruled by drug traffickers.”

On Monday, President Andres Manuel Lopez Obrador repeated his argument that saving lives was more important than any arrest.

But he turned to his favorite sport, baseball — also a passion among people in Sinaloa — to play down the issue and talk about something else.

“The important thing is that normality has returned to Culiacán, things started to return to normal Friday, Saturday, Sunday. There were even baseball games” there, he quipped.

The president even noted with pride the role played by Sinaloa-born Houston Astros’ relief pitcher Roberto Osuna in his team’s weekend victory over the New York Yankees, which earned them a berth in the World Series.

“I think that is important for Sinaloa, too, because we have to believe that life is much, much, much more than just a bad moment, a sad and anguishing evening,” Lopez Obrador said, referring to Thursday’s violence.

But Lopez Obrador’s “hugs, no bullets” slogan for crime fighting appears to be in trouble.