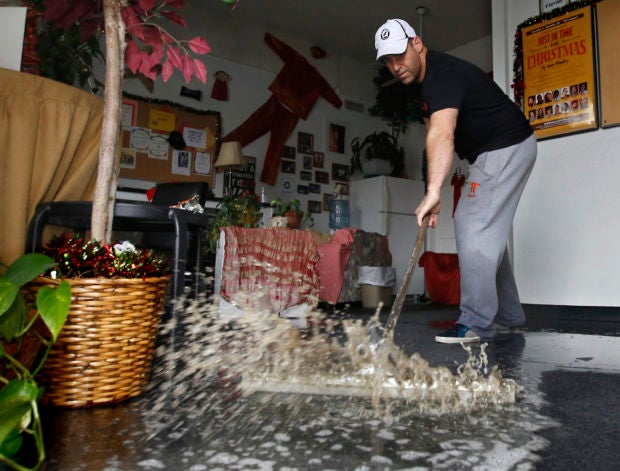 FILE – In this Jan. 5, 2016, file photo, Chris Lene sweeps water out of one of the businesses in the building he owns that was flooded by rainwater in Sacramento, Calif. Climate change is making stronger El Ninos, which change weather worldwide and heat up an already warming planet, according a study in Proceedings of the National Academy of Sciences on Monday, Oct. 21, 2019. (AP Photo/Rich Pedroncelli, File)

Scientists examined 33 El Ninos — natural warming of equatorial Pacific that triggers weather extremes across the globe — since 1901. They found since the 1970s, El Ninos have been forming farther to the west in warmer waters, leading to stronger El Ninos in some cases.

A powerful El Nino can trigger drought in some places, like Australia and India. And it can cause flooding in other areas like California. The Pacific gets more hurricanes during an El Nino and the Atlantic gets fewer.

El Nino makes winters milder and wetter in the United States, which generally benefits from strong El Ninos. They’re devastating elsewhere. The 1997-98 event caused thousands of deaths from severe storms, heat waves, floods and drought, costing between $32 billion and $96 billion, according to a United Nations study .

The shift for the origin of El Nino by hundreds of miles from the east of the International Dateline to the west of that point is important because the water to the west is naturally warmer, said study lead author Bin Wang, an atmospheric scientist at the University of Hawaii.

Before 1978, 12 of the 14 El Ninos formed in the east. After 1978, all 11 were more central or western, according a study in Monday’s Proceedings of the National Academy of Sciences .

Researchers did not study La Ninas, the cooler flip side to El Nino.

Wang said there have been three “super” El Ninos, starting in 1982, 1997 and 2015 and all started in the west. During each of those El Ninos, the world broke new average temperature records.

The study adds to growing evidence that “El Nino events are becoming stronger under continued climate change,” Georgia Tech climate scientist Kim Cobb, who wasn’t part of the research, said in an email.

Florida State University El Nino expert Allan Clarke, however, said the study focused too much on water temperature, when so much of El Nino formation depends on how water and the atmosphere are interconnected. /gsg