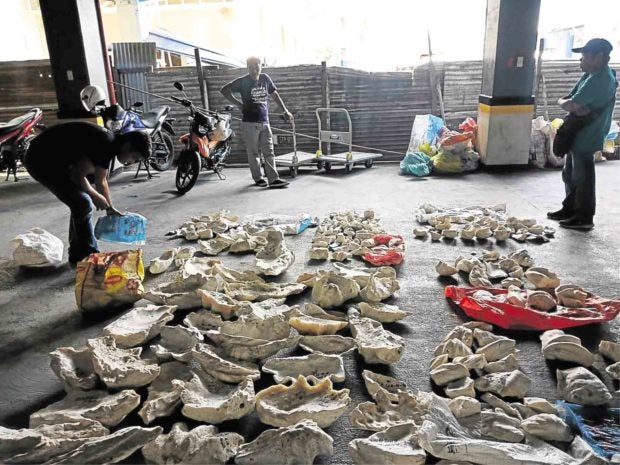 CORDOVA HAULA team from the National Bureau of Investigation and the Bureau of Fisheries and Aquatic Resources (BFAR) documents the fossilized “taklobo” (giant clams) that they seized from traders in Cordova town, Cebu. The haul is a product of a monthlong monitoring on the suspects’ activities. —PHOTO COURTESY OF BFAR

CEBU CITY, Philippines — A couple and three others are facing charges for violating the Philippine Fisheries Code after authorities seized from them last week fossilized shells of giant clams, locally called “taklobo,” valued at P36 million.

The charges for violation of Republic Act No. 10654 were filed against couple George and Bebing Oldama, Rowena Tajanlangit and two other men in the Cebu provincial prosecutor’s office on Friday.

Tomas Enrile, National Bureau of Investigation regional director in Central Visayas, said it took them a month of monitoring to validate the suspects’ illegal operations.

“It was hard to catch them in the act of possessing these giant clams,” Enrile told the Inquirer.

About 2,000 kilograms of giant clams were seized from the suspects by a team composed of personnel from the NBI and the Bureau of Fisheries and Aquatic Resources (BFAR) in separate villages in Cordova town, Cebu province.

“We are still trying to figure out where they would use these clams,” he said.

In a statement, Alfeo Piloton, BFAR regional director, urged the public to alert law enforcers or the bureau in case they catch someone collecting, possessing or selling fossilized giant clams, which is prohibited under the country’s environmental and fisheries laws. —Nestle Semilla