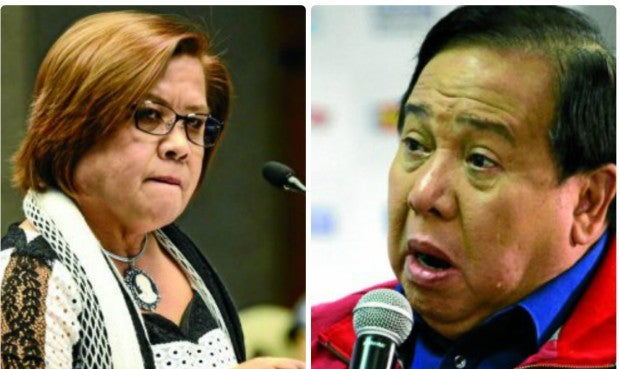 MANILA, Philippines — Sen. Richard Gordon pointed out anew that Sen. Leila de Lima should have known there was something wrong with the controversial good conduct time allowance (GCTA) law when she crafted its guidelines.

De Lima, however, immediately refuted Gordon saying the latter should stop “using” her to “please” and “redeem” himself to President Rodrigo Duterte.

De Lima, a staunch critic of the President, blasted Gordon for supposedly repeating the “same lie” he said during a Senate hearing on the release of heinous crime convicts through the GCTA law.

“I didn’t really want to go into this. But you know, when the GCTA was signed by the President, he would consult the Secretary of Justice: ‘Is this OK?’ You study it first before signing it,” Gordon, speaking partly in Filipino, said in an interview with ABS-CBN Channel on Monday.

The GCTA law was signed by President Benigno Aquino III in 2013.

The law’s implementing rules and regulations (IRR) was crafted by De Lima, who was the justice secretary at the time, and then-Interior Secretary Mar Roxas.

“She was in charge of the IRR. Half of the IRR was hers because of DOJ’s power over the Bureau of [Corrections]…She could have seen that,” Gordon said, apparently referring to the inclusion of heinous crime convicts among inmates qualified for GCTA.

“When Justice Caguioa assumed the post, he saw it right away: ‘This is wrong,’” Gordon added.

In 2015, Caguioa issued Department Order No. 953, which required the approval of the justice secretary before any heinous crime convict could be released through the GCTA law.

Earlier, the Ombudsman asked De Lima and Roxas to explain or clarify why the IRR had removed heinous crime convicts from the list of inmates not qualified for the GCTA.

This developed as the Senate blue ribbon and justice committees, chaired by Gordon, investigated the alleged wrongful releases of heinous crime convicts through the said law.

“She [De Lima] will then saw that I’m just assuming things. But you know, the problem is, it was about to be a campaign period and there were accusations against her — I gave it short shrift, right? — but there were accusations against her that there is fundraising going on in Bilibid. In Bilibid, you can make a lot of money in drugs, in food, in GCTA,” Gordon went on.

But De Lima, who is currently detained in Camp Crame on drug charges, said: “I do not really know what Senator Gordon’s beef with me is. He is the only source of the supposed rumor that I used the GCTA IRR to shake down prisoners.”

“But astoundingly, in the same breath and without realizing the patent contradiction in his narrative, Gordon lauds former DOJ Secretary Caguioa for issuing a department order mandating that the release of prisoners convicted of heinous crimes must first be approved by him,” she pointed out.

De Lima also told Gordon that it would have been easier if she had issued the department order instead of “supposedly tweaking” the IRR of the GCTA law.

“Did not SOJ [Secretary of Justice] Caguioa’s action likewise expand the SOJ’s power over the release of prisoners, the very same thing you are charging me with — in supposedly tweaking the GCTA IRR?” she said.

“So which is it? If someone else does it, you find it admirable. But if I do it, it’s definitely illegal and with criminal intent?” she added in Filipino.

De Lima then asked Gordon to stop “defaming” her.

[Right now, I’m defenseless, especially against a person who’s worse than market gossip in creating intrigues against other people.]