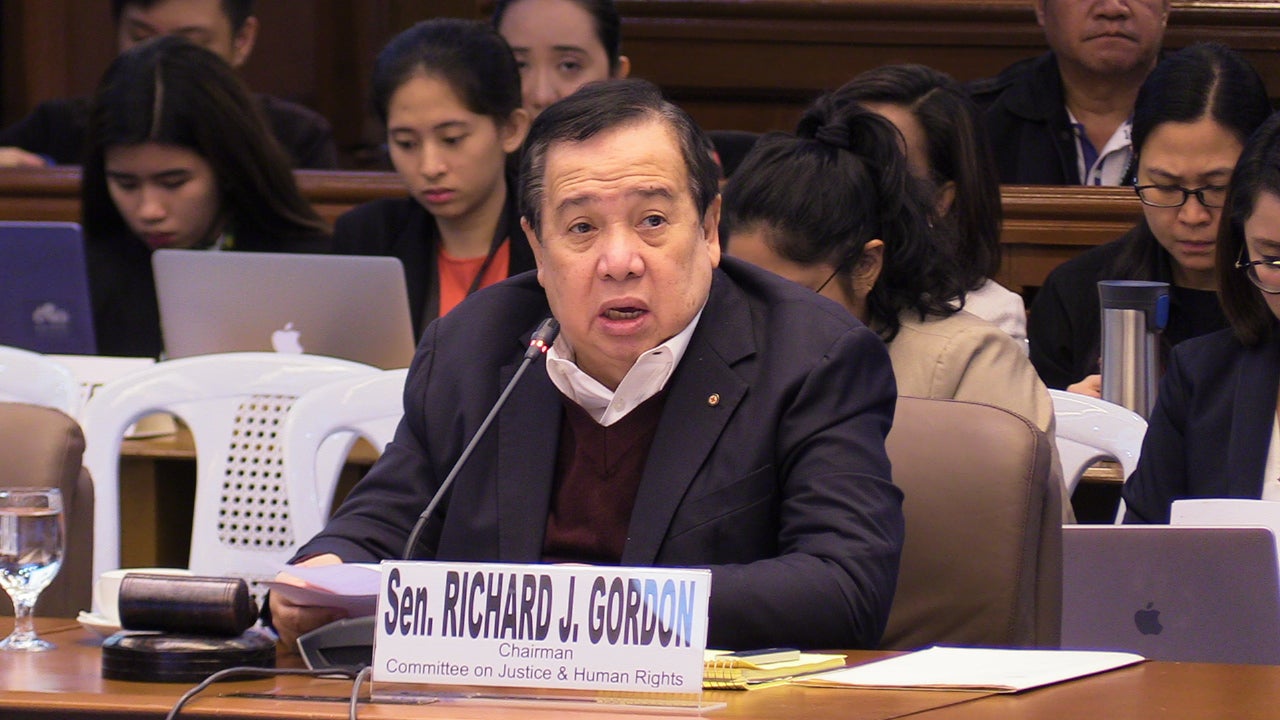 Gordon brought up the issue as the Senate investigated releases under the GCTA law, saying this became another source of funds after the kubols, which had served as a source of bribe money, were destroyed.

De Lima, a vocal critic of Duterte,  is currently detained on charges that she had facilitated the drug trade in the NBP and had received money from convicted drug lords through her former bodyguard and boyfriend Ronnie Dayan.

She also used to be the Department of Justice chief and was involved in the crafting of the implementing rules and regulations for the GCTA law.

“The troop of Ronnie Dayan entered the business of GCTA. Is that possible?… I’m just saying in the realm of possibility, it can happen. That’s not evidence. I know what I’m doing,” Gordon said at the hearing.

“But since the faucet here was turned off, there is an opportunity now with the GCTA, within the power of the secretary of justice, she could let you or the BuCor secretary to carry out the releases,” he added.

De Lima denied the allegations and slammed her colleagues for practically testifying for the witnesses against her.

“I guess parliamentary courtesy, delicadeza, even basic human decency is out the window in the halls of the Senate,” she said.

Gordon also said that De Lima’s successor at the DOJ, Benjamin Caguioa, had issued a department order requiring the BuCor to secure the department’s approval before releasing inmates.

“He saw something wrong with the GCTA,” he said.

He noted that it was De Lima and then Interior Secretary Mar Roxas who crafted the IRR for the GCTA law.

There was no testimony presented categorically saying that De Lima asked money to free inmates under the GCTA law.

At the hearing, former BuCor officer in charge Rafael Ragos and National Bureau of Investigation agent Jovencio Ablen repeated their testimonies, first told in court, that they delivered money from drug inmates to Dayan and De Lima for her senatorial bid.

In an interview with reporters after the hearing, Gordon said the committee used the testimony of the two to show that money was being delivered to De Lima through Dayan.

He said it was easier to believe that they could get money through the GCTA, which would not be that obvious because leave credits would be given to inmates.

Asked if it was established that De Lima got money through the GCTA, he only said that the opportunity was there.

“It can be said, following a pattern of behavior that she accepts money that was said to be used for the campaign, I saw that there was really an opportunity, if you would raise funds, that you would bargain using the GCTA to get a bigger amount,” he said.

Pressed if it was clear that De Lima benefited from the GCTA for sale scheme, he said it was not. But he insisted that his theory was plausible.

“If you look at the theory, it sounds convincing enough to me,” he said.

De Lima, in her statement, defended the IRR for the GCTA law, and said Gordon had tried to steer the hearing away from the violations committed by former BuCor chiefs Nicanor Faeldon and Ronald Dela Rosa.

“The IRR reflected the letters of the law. Any problem they have as a result of the implementation of R.A. No. 10592 lies with the law, not the IRR,” she said.

She also said it was reported to her that Ragos did not even have to narrate his testimony against her.

Sen. Francis Pangilinan also came to De Lima’s defense and called on the Senate to stop using her as the scapegoat in the BuCor scandal.

Pangilinan said it was not De Lima who tried to free rape-slay convict Antonio Sanchez and the convicts in the rape-slay of the Chiong sisters.

“Why had the investigation turned towards her? How did the discussion move from Faeldon to Sen. De Lima? The attempt to link Sen. Leila to the shenanigans and corruption in the BuCor under Faeldon is not believable,” he said.

Using De Lima to muddle the issue is unfair, he said.

“Also, it goes against all sense of fair play to drag the name of the already incarcerated Senator Leila de Lima to muddle the scandal involving Bilibid officials caught ordering the release of rich convicted criminals, contrary to the law that is meant to give justice to poor, powerless detainees who should rightfully be released for good behavior,” he said.

“Allow Senator De Lima to defend herself in the Senate hearing that is using her as scapegoat in the scandal that has blown up in their face,” he added.