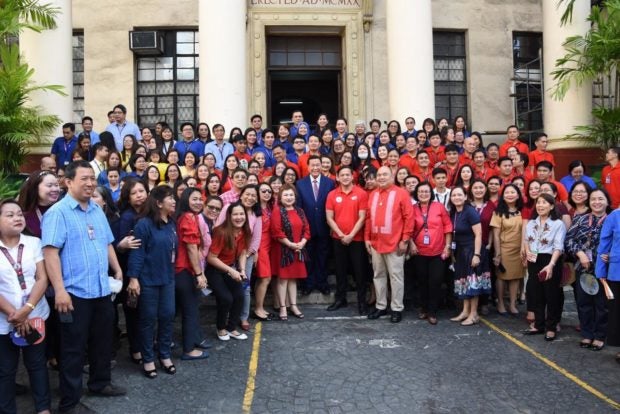 Carpio received a certificate of appreciation from the Supreme Court Program on Awards and Incentives for Service Excellence (SC PRAISE) Committee “for leaving the Court and to the Republic his priceless legacies…For his great love of country…For simply being himself; a. shining light and anchor both in his office with his loyal staff and in the Supreme Court en banc where he has provided leadership and a steadying hand during some of its most challenging times.”

Mentioned are the notable decisions of Carpio such as the Chavez v. Public Estates Authority and Amari Coastal Bay Development Corporation (G.R. No. 133250, July 9, 2002) that expounded the public’s right to information on matters of public concern and on the State policy on full transparency in all transactions involving public interest.

Also, mentioned is the case of Republic of the Philippines vs. Sandiganbayan (G.R. No. 104768, July 21, 2003) where the Court ruled that even before the adoption of the Provisional Constitution, the human rights are protected by the International Covenant on Civil and Political Rights and the Universal Declaration of Human Rights.

The Court also recognized Carpio’s legacies to the Supreme Court such as his brainchild, the E-Library, and Republic Act 9946 or the Act Granting Additional Retirement, Survivorship, and other benefits to members of the judiciary.

Also recognized is his personal advocacy on the country’s claim over the West Philippine Sea under the United Nation’s Convention on the Law of the Seas.

Last week, the Supreme Court unanimously passed a resolution giving Carpio the benefits and privileges of a Chief Justice.

Retired Chief Justice Artemio Panganiban said it was only fitting because Carpio has served longer as acting chief justice than some of the Chief Justices.

While he was acting chief justice, he allowed the posting at the Supreme Court website a summary of the statement of assets, liabilities and net worth (SALN) of the justices which has become under scrutiny during Corona’s trial.

He was also acting chief justice after Maria Lourdes Sereno was booted out of the Supreme Court via a quo warranto proceedings in 2018.

“When needed, and on many occasions that the Office of the Chief Justice was vacant, he took on the mantle of leadership for the Court comfortably and without hesitation. His leadership provided the stability for the institution,” his colleagues said when he was awarded a Plaque of Recognition.

“He is always a solid anchor, a firm impenetrable rock, and an immovable tower of strength that holds the Court together when it truly mattered,” Associate Justice Marvic Leonen said as he read the recognition given to Carpio.

“As I return here to this spot where I started my journey before the Supreme Court family, a flag ceremony one fine day 18 years ago, I am both happy and sad.

“Happy, because I have done my best to serve our people, and sad because I am bidding farewell to my family of the last 18 years. I cannot name all of you individually. You have made my long journey pleasant and productive,” Carpio said as he also extended his gratitude to his staff for their loyalty and dedication because “they have lightened the heavy burden on my shoulders.”

A week from now, Carpio will bow out of the Supreme Court after a simple dinner with his colleagues on Oct. 25./ac