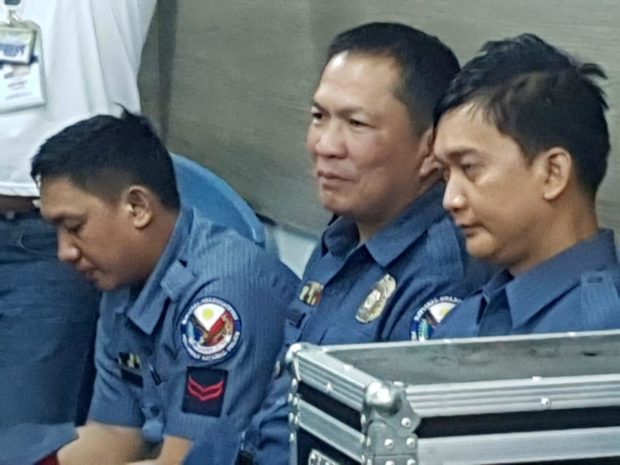 Roque, Vital, and Guerrero were also involved in the controversial drug raid in Pampanga in 2013.

Gamboa said he temporarily downgraded to a suspension of 59 days the penalty for Lt. Joven De Guzman since the less grave neglect of duty found against him by the PNP Internal Affairs Service (IAS) does not deserve dismissal from the service. De Guzman was linked to the operations in Pampanga and Antipolo City.

But he stressed he made the move only for De Guzman to be “tried for a graver offense” and possibly be recommended for dismissal again if the IAS finds substantial evidence against him.

“Hindi ko dinowngrade ‘yun ha. I want to be clear with that. Binigyan ko sya ng [I gave him an] appropriate penalty for the charge which is less grave kaya [that’s why] 59 days suspension pero ‘yung demand ko [but my demand was that] he will be charged again but this time for a graver offense and sa nakikita ko sa [based on what I see from] records, there is enough and substantial evidence then I think he will also be dismissed from the service,” said Gamboa.

The PNP-IAS, in a resolution dated October 10, has recommended the said penalties to the seven police officers.

But according to Gamboa, the accused police officers still have the right to file a motion for reconsideration on their dismissal.

“After its denial, then they can go to the usual appeal mechanism of administrative cases,” he said.

The controversy surrounding the 2013 anti-drug operation in Pampanga surfaced as it became the subject of a Senate investigation on the Good Conduct Time Allowance law that has branched out into a probe on “ninja cops.”

Erstwhile PNP chief Gen. Oscar Albayalde, who went on non-duty status weeks before his retirement from the service, was the Pampanga police director when the controversial drug operation was conducted.

The PNP-Criminal Investigation and Detection Group also filed on Monday criminal charges against Albayalde and 13 policemen involved in the Pampanga drug raid. /gsg

Read Next
Pagasa’s Monday forecast: Cloudy skies with a chance of rain as ‘Perla’ exits
EDITORS' PICK
Duterte signs terror law amid wide opposition
Smart releases Hyun Bin’s second TVC
‘Keep our silence:’ Duterte tells troops not to avenge slain agents
Stress and PH millennials amid pandemic: What surveys found
EuroMillions Superdraw: A lottery draw unlike any other is coming to the Philippines
Water remains our saving grace right now
MOST READ
Duterte tells military: No other president looked at you the way I did
Locsin warns of ‘severest response’ if China’s army drills in SCS ‘spill over’ to PH domain
Duterte signs terror law amid wide opposition
Man who stole 2 cans of luncheon meat lands in jail in Manila
Don't miss out on the latest news and information.