The PNP -CIDG has amended its original complaint to include Albayalde who was the Pampanga Provincial Police Director when the controversial drug raid involving “ninja cops” took place.

Albayalde is facing a complaint for violation of Republic Act 9165 or the Comprehensive Dangerous Drugs Act of 2002 for misappropriation, misapplication or failure to account for the confiscated, seized and/or surrendered dangerous drugs.

During the 2013 Pampanga raid, it was revealed during the Senate inquiry that what was seized was 200 kilos of methamphetamine hydrochloride or shabu but what was declared was only 36 kilos.

“The Senate Blue Ribbon Committee hearings, through credible witnesses and evidence established the respondents’ grand cover-up and non-declaration of the true quantity of the illegal drugs seized, [sums of money], and other items seized during the said operation,” read the amended complaint.

Albayalde who already stepped down last Oct. 14 and is set to retire next month is also facing cases for violation of Section 3(a) and (e) of the Anti-Graft Law.

Section 3 (a) penalizes a public officer for influencing another public officer to perform an act in violation of laws or rules and regulations set by a competent authority. In the case of Albayalde, the complaint stated that he should be prosecuted for asking now Philippine Drug Enforcement Agency (PDEA) Chief Aaron Aquino who was then head of the Central Luzon Police not to implement the dismissal order against the 13 cops involved in the raid.

The complaint also took note of retired police General Rudy Lacadin’s testimony stating that Albayalde admitted that he only “got a little” from the 2013 drug raid.

On the other hand, Section 3(e) was violated when the cops misdeclared the seized drugs, substituting Johnson Lee with Ding Wenkun in exchange for P50-million, breaking the chain of custody rule, for taking Lee’s Toyota Fortuner.

“Such criminal acts caused undue injury to the government when it failed to prosecute and hold liable the proper person, among others,” read the complaint.

The CIDG complaint also alleged that Albayalde violated Article 171 of the Revised Penal Code for Falsification by public officer, employee or notary or ecclesiastic minister, Dereliction of Duty when he declared in his Special Report dated Dec. 2, 2013 that the raid in Mexico, Pampanga happened on Nov. 29, 5 p.m. when after the Senate hearing showed that it actually happened on the same date but at 10 a.m.

The same report also mentioned that Ding Wenkun was the subject of the raid but the Senate hearing showed that the true target was Johnson Lee.

CIDG’s Lieutenant Colonel Joseph Q. Orsos said the amended complaint is based on testimonies of the witnesses during the 2013 raid in Pampanga as well as the transcript of the hearings conducted at the Senate.

“The totality of the evidence shows that he [Albayalde] is probably liable,” Orsos told reporters.

He said there is no strong single evidence against the former top cop but “the circumstances will show that he is probably liable. Included of course are the admissions made during the Senate investigation.”

During the preliminary investigation, witnesses during the 2013 raid in Pampanga also appeared and affirmed their affidavits.

Senior Assistant State Prosecutor Alexander Suarez, who chairs the panel, gave the respondents until November 5 to submit their respective counter-affidavits to refute the allegations against them.

The complainant recommended that the 13 be indicted for violating Article 211-A (qualified bribery of the RPC and for violating other provisions of RA 9165, particularly, Section 29 (planting of evidence) and 32 (liability of a person violating regulations of the Dangerous Drugs Board) of of Article II and Section 92 (delay and bungling in the prosecution of drug cases) of Article XI.

It was also recommended that Baloyo be indicted with two counts of violating Article 171 of the RPC.

The PNP-CIDG also sought that probable cause be found against De Guzman, Santos and Guerrero for violating Article 183 (false testimony and perjury) of the RPC. 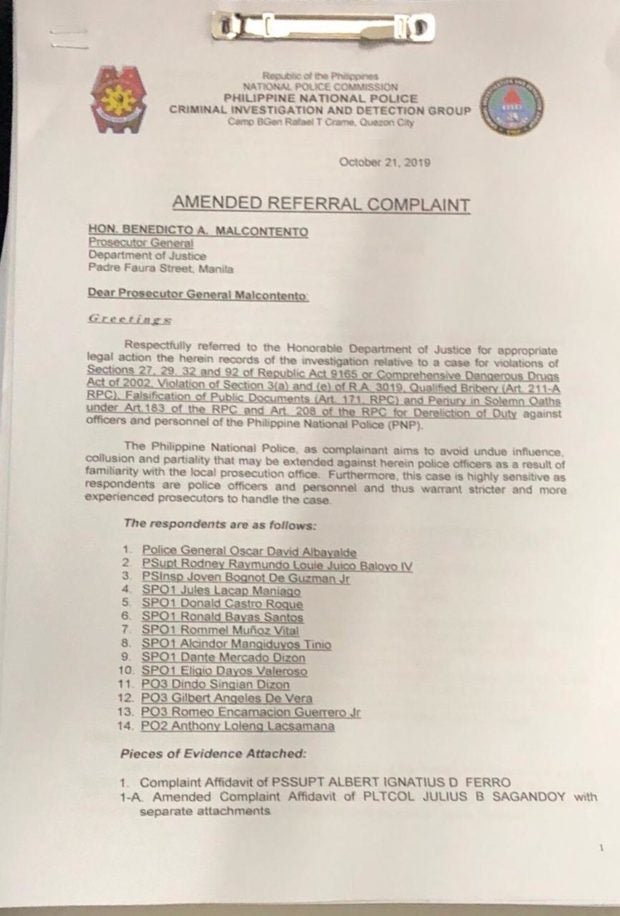 LIVE: Department of Justice reinvestigation on case vs. 13 "ninja cops" for 2013 Pampanga raid