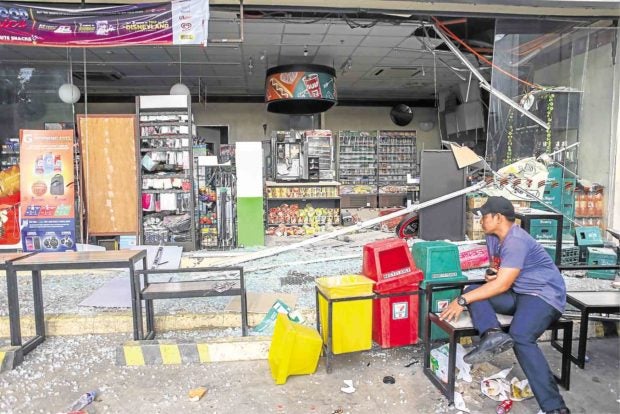 AFTERMATH A store owner in Digos City watches over his shop after a 6.3-magnitude earthquake jolted the provincial capital of Davao del Sur on Oct. 17 and damaged business establishments, buildings and houses. —AFP

DIGOS CITY, Davao del Sur, Philippines — About 2,000 workers may lose their jobs if the nine establishments earlier ordered closed by the city government due to safety concerns after a strong earthquake hit parts of Mindanao last week will not resume operations soon.

Mayor Josef Cagas earlier ordered the closure of these establishments, most of them shopping malls and department stores, because of structural defects found after a 6.3-magnitude earthquake jolted the provinces of Cotabato and Davao del Sur and other cities and urban areas in Mindanao on the night of Oct. 17.

Malls and department stores have been mushrooming all over the city in recent years that residents were surprised that most of these newly built establishments had been ordered closed after inspection by local building officials.

Records from the city’s Public Employment Services Office (Peso) showed that 1,964 workers, most of them employed by malls and department stores, were displaced by the closure.

But Shannie Lou Solatorio, Digos Peso manager, said she expected the number of affected workers to increase since many had yet to report to the city government and register.

But Cagas said he was hopeful that these establishments would reopen soon to avoid the disruption of economic activities in the city.

“I really want to see all of these businesses rehabilitated as soon as possible because there are thousands of workers who will ultimately lose their jobs if they remain nonoperational,” Cagas said.

Lawyer Nikkolo Marco Aurelio Cortes, city information officer, said Cagas required intensive inspections of the establishments, among these a school, before the city could issue the necessary occupancy clearance and allow their owners to resume operations.

Although some buildings incurred minor damage and would easily pass the city’s inspection and requirements, Cortes did not rule out the possibility that other establishments would have to be demolished.

“We are reaching out to the HR (human resource) offices of those establishments to report their affected workers,” Solatorio said.

The city government learned that the management of some of these malls and department stores were asking their employees to report to help in repair and cleanup following the quake.

Davin, through an executive order issued on Friday, asked the local police and village officials to evacuate residents facing threats of landslides should heavy rains occur.

The mayor heeded the recommendations of the local disaster risk reduction and management council and of the Philippine Institute of Volcanology and Seismology experts who assessed the extent of the damage in the village.

Davin’s order also included the village of Malawanit, where huge cracks on the ground triggered a landslide during the quake, causing the death of a 22-year old mother and her 9-month-old child.

In Kidapawan City, local officials issued restriction orders to administrators of five hospitals in the city to prohibit them from using rooms and other areas found unsafe after the quake. —With a report from Abner Francisco