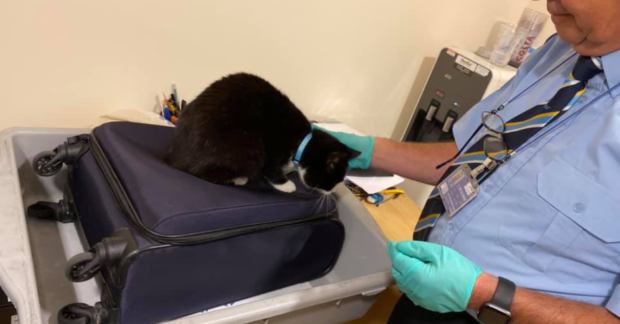 Nick and Voirrey Coole’s cat named Candy on top of one of their bags. Image: Facebook/Nick Coole

A couple almost missed their flight when airport security found their pet cat in one of their carry-on baggage.

Nick Coole and his wife Voirrey were flying from the Isle of Man to New York City, United States when the cat was caught in their bag last Wednesday, Oct. 16, as per Metro on the same day.

The couple was traveling to New York City to celebrate Nick’s 40th birthday, and had made sure to leave one of their carry-on bags empty for gifts from their trip.

Upon reaching airport security and having their luggage scanned, the empty bag was pulled aside for further inspection. Authorities then brought the couple into an interrogation room and told the travelers that a cat was inside their suitcase.

Their pet cat named Candy had apparently snuck into her owners’ luggage before the Cooles left for the airport, as per report.

The couple was as puzzled as the security when they found Candy since they did not hear or feel the animal while they were on their way to the airport. As to how Candy ended up in their bag, Nick credited it to her habit of getting into bags and boxes.

After clarifying the situation with security, the staff even helped the couple find a way to return Candy home so the couple would not miss their flight. As per report, Voirrey’s father Barry had rushed to the airport to get the cat and bring it back home.

You know that feeling, when you get ushered into a side room at airport security because you’ve got a cat in your hand…

“You know that feeling, when you get ushered into a side room at airport security because you’ve got a cat in your hand luggage,” Nick said in jest.

The post has since gone viral with over 6,700 reactions and over 2,600 shares, as of writing. Ryan Arcadio/JB