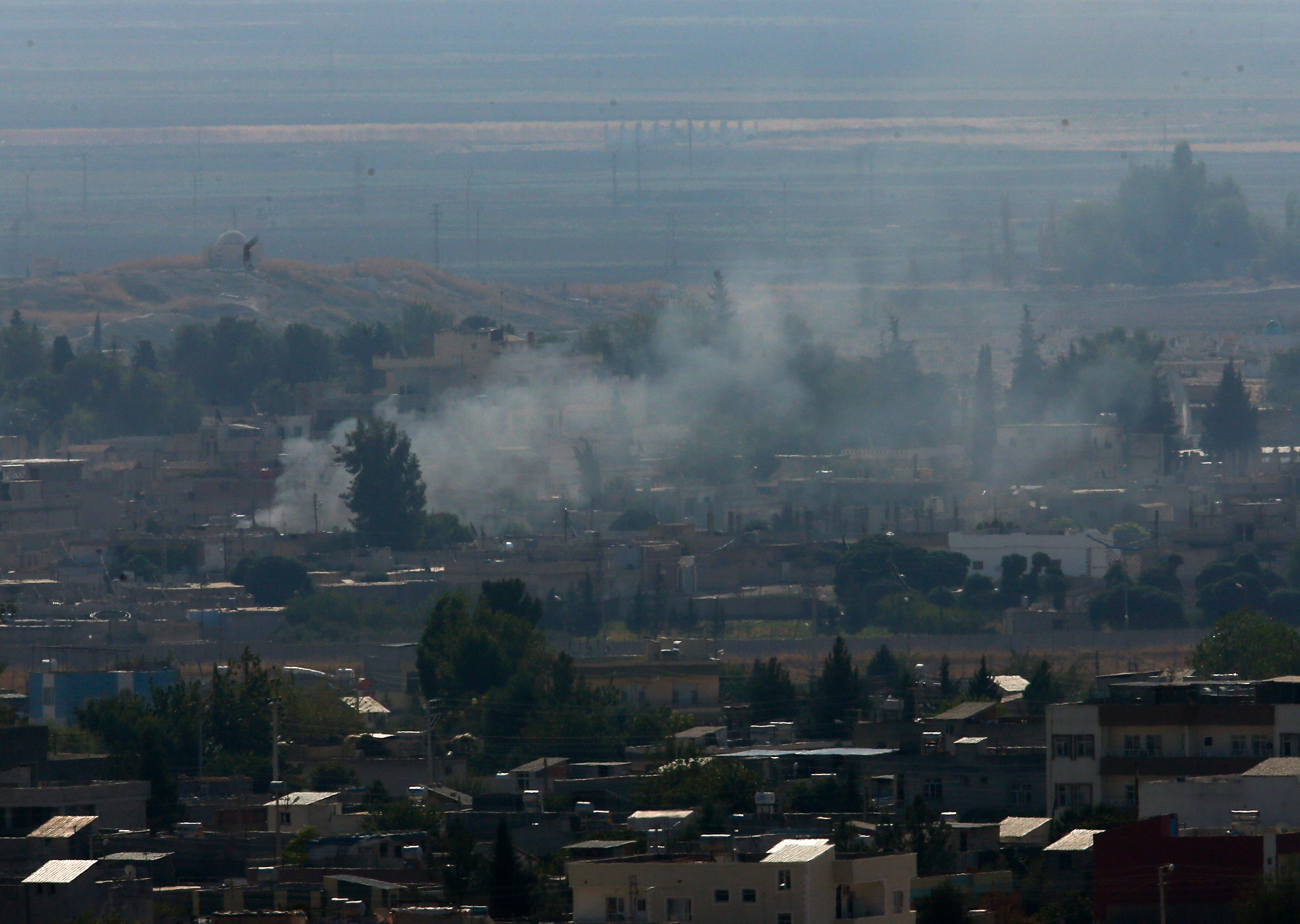 In this photo taken from the Turkish side of the border between Turkey and Syria, in Ceylanpinar, Sanliurfa province, southeastern Turkey, smoke billows from targets in Ras al-Ayn, Syria, caused by shelling by Turkish forces, Friday, Oct. 18, 2019. Fighting continued in a northeast Syrian border town at the center of the fight between Turkey and Kurdish forces early Friday, despite a U.S.-brokered cease-fire that went into effect overnight. Shelling and gunfire could be heard in and around Ras al-Ayn, as smoke billowed from locations near the border with Turkey and the Turkish town of Ceylanpinar. (AP Photo/Lefteris Pitarakis)

CEYLANPINAR, Turkey  — Fighting continued Friday morning in a northeast Syrian border town at the center of the fight between Turkey and Kurdish forces, despite a U.S.-brokered cease-fire that went into effect overnight.

Shelling and gunfire could be heard in and around Ras al-Ayn as smoke billowed from locations near the border with Turkey and the Turkish town of Ceylanpinar. The fighting died down by mid-morning while smoke continued to rise.

The Syrian Observatory for Human Rights, a war monitor, reported intermittent clashes in Ras al-Ayn but relative calm elsewhere since Thursday night, when Turkey and the U.S. agreed to a five-day cease-fire to halt the Turkish offensive against Kurdish-led forces in the region.

The agreement — reached after hours of negotiations in Turkey’s capital of Ankara between Turkish President Recep Tayyip Erdogan and U.S. Vice President Mike Pence — requires the Kurdish fighters to vacate a swath of territory in Syria along the Turkish border. That arrangement would largely solidify the position Turkey has gained after days of fighting.

The shelling Friday came even after the commander of Kurdish-led forces in Syria, Mazloum Abdi, told Kurdish TV late on Thursday: “We will do whatever we can for the success of the cease-fire agreement.” But one Kurdish official, Razan Hiddo, declared that the Kurdish people would refuse to live under Turkish occupation.

Kurdish fighters have already been driven out of much, but not all, of a swath of territory that stretches about 100 kilometers (60 miles) along the middle of the Syrian-Turkish border, between Ras al-Ayn and Tal Abyad.

But Kurdish forces are still entrenched in Ras al-Ayn, where on Thursday they had been fiercely battling Turkish-backed Syrian fighters trying to take the town. Whether the Kurdish fighters pull out of Ras al-Ayn will likely be an early test of the accord.

The Kurds were U.S. allies in the fight against the Islamic State but came under assault after Trump ordered U.S. troops to pull out. The Kurdish-led forces have since invited the Syrian government’s military, backed by Russia, to deploy there to protect them from Turkey. Syrian troops have already rolled into several key points along the border.

Trump framed the U.S.-brokered cease-fire deal with Turkey as “a great day for civilization” but its effect was largely to mitigate a foreign policy crisis widely seen to be of his own making.

Turkey considers the Kurdish fighters terrorists because of their links to outlawed Kurdish rebels fighting inside Turkey since the 1980s.

Turkey’s pro-government dominated media hailed the cease-fire agreement as a clear win for Erdogan. “Great Victory” read Yeni Safak’s banner headline. “Turkey got everything it wanted.” Sabah newspaper headlined: “We won both on the field and on the (negotiating) table.”  /muf

Read Next
Senate joint panel suggests IAS be separated from PNP
EDITORS' PICK
PH to send 584 athletes, 161 officials to Vietnam SEA Games
Gear up and get ready to play with Yamaha Mio Gear
SSS: Members on home quarantine due to COVID-19 can apply for sickness benefit
Acer starts the year off strong with the Aspire Vero National Geographic Edition
Kalinga, Ifugao, Mt. Province, N. Samar will be under Alert Level 4 from Jan 21-31
Mobile COVID-19 vaccination for commuters, transport workers set at PITX
MOST READ
Imelda Marcos trends on Twitter after octogenarian jailed for allegedly stealing mangoes
Mayor Vico counters vice mayor: ‘Did I say anything about his family?’
Municipal court in Pangasinan sets arraignment for ‘Lolo Narding’
‘Unbelievable!’ Pacquiao hits DA’s plan to import 60,000 MT of fish
Don't miss out on the latest news and information.