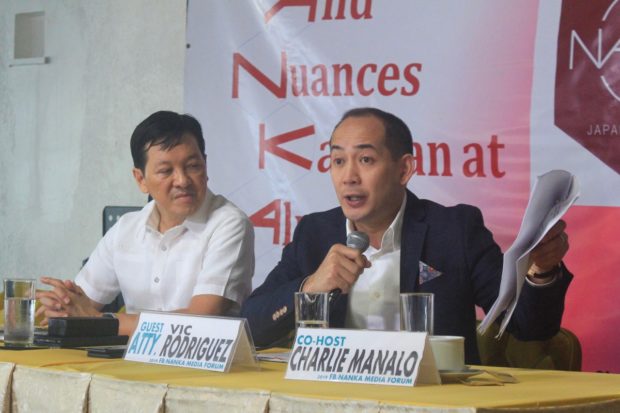 MANILA, Philippines – Whether the Presidential Electoral Tribunal (PET) was able to recover 15,000 votes for Vice President Leni Robredo Robredo or 5,000 votes for former Senator Ferdinand “Bongbong” Marcos, the latter’s lawyer believes these should be considered “substantial.”

Atty. Vic Rodriguez, one of Marcos’ lawyers in his poll protest against Robredo, said on Friday that the supposedly recovered votes are significant since elections are considered an equalizer for the rich and the poor.

He also said that the law does not provide a formula to define whether recovered votes are substantial or not.

“Substantial recovery has no definition in the law or in jurisprudence, so if they will say 5,000 votes were recovered from one side, and 15,000 votes for the other, isn’t that substantial?” Rodriguez asked.  “We always say that it is only during elections that the poor and the rich are equal.”

“Isn’t it that if we have a 15,000 recovery, and 5,000 recovery for (former) Senator Marcos, shouldn’t we be even more speculative of the poll results?  It appears that the tally used by the National Board of Canvassers in proclaiming the winners last 2016 is not reliable,” he added.

Rodriguez further explained that the protest should not be dismissed because it is also possible that Marcos can recover a bigger amount than Robredo in other provinces, which have not been subjected to recount yet.

Robredo’s lawyer Romulo Macalintal previously urged the Supreme Court, sitting as PET, to uphold Rule 65 of the PET rules, which indicates that the poll protest may be dismissed if the recovered votes are not deemed ‘substantial’.

“Robredo’s 15,000 recovered votes came from her bailiwick.  If we continue recounting, isn’t possible that Marcos may also be able to recover more votes?” he asked.

However, Rodriguez admitted that do not yet have a copy of the results, saying that they are only basing these numbers on claims by the Robredo camp.

Macalintal previously filed a motion asking for the release of the recount results, after claiming that the seating Vice President’s votes even grew by around 15,000 after the recount.

“The figure that we mentioned, that is what Robredo is spreading.  The reason why we are quiet regarding the recovery of votes is because we do not have any document or figures to back our claims,” Rodriguez explained.

“That’s why we are waiting for it, and I don’t know where they are getting their figures, that’s why I said last week that if they have an advanced copy, maybe they can provide us too for us to answer their allegations intelligently,” he noted.

The poll protest was filed by Marcos in 2016, after losing to Robredo in that year’s presidential elections.  Marcos lost by a margin of 280,000 votes, but insisted that he was a victim of massive cheating.

READ: With no substantial recovery, Marcos now wants recount of other areas–Robredo

READ: Marcos: I was robbed of 3 years as VP; Robredo: I’m not the thief between us