Trump lashes out at Democrats during Texas rally

DALLAS- President Donald Trump unleashed a scathing screed against Democrats at a rally in Texas Thursday, bashing his opponents as “crazy” as they push forward on an impeachment inquiry. 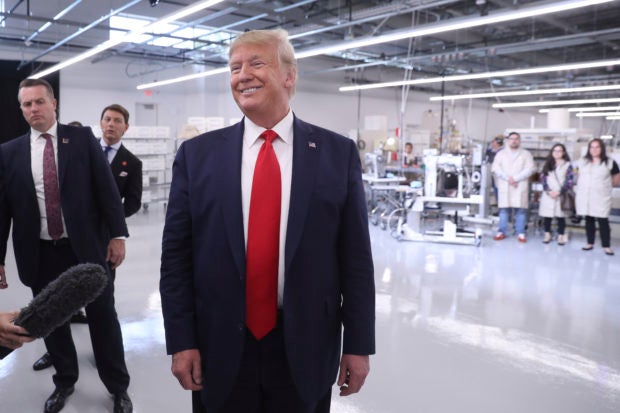 A day after House Speaker Nancy Pelosi and other top Democrats walked out of a White House meeting that had devolved into an insult-fest, Trump denounced her as “crazy Nancy.”

“She’s nuts,” he told the crowd at a packed stadium in Dallas.

“At stake in this fight is the survival of American democracy itself. Don’t kid yourselves,” Trump said, claiming about the Democrats, “I really don’t believe anymore that they love our country.”

The comments come as Democrats continue their quickly unfolding inquiry, deposing witness after witness as they build their case. But Trump and his campaign have tried to turn the inquiry into a rallying call for his supporters, accusing Democrats of using the Constitutional process to try to overturn the results of the 2016 election.

“They’re coming after and fighting you and we never lose,” Trump said, predicting the 2020 election will be “a landslide” for Republicans, despite polling showing him lagging behind.

Trump’s day included a tour of a new Louis Vuitton leather workshop in north central Texas and a fundraiser in Fort Worth that, combined with a pre-rally reception in Dallas, brought in $5.5 million, according to the Republican National Committee.

Texas is a crucial state for Republicans, both in terms of money and votes.

Trump carried the GOP stronghold and its 38 Electoral College votes by 9 points in 2016. But Democrats have pointed to demographic changes — as well as the fact that Republican Sen. Ted Cruz won reelection by less than 3 points last year — as evidence that the second-most-populous state could soon be in play.

As he campaigns for a second term, Trump’s team has tried to focus attention on economic gains over the last three years, including the low unemployment rate.

Pressing that message, Trump cut the ribbon at a new production facility for the luxury brand Louis Vuitton in Alvarado with his elder daughter, Ivanka.

Trump joked that the company, which is known for its logoed handbags and luggage, has cost him “a lot of money over the years.” His wife, first lady Melania Trump, has repeatedly been spotted traveling with the brand.

“This workshop will soon employ 500 of the most highly skilled workers anywhere in the world,” Trump said. “No one can match the precision and perfection of an American artisan.”

The Texas visit comes at a treacherous time for Trump, whose dealings with the president of Ukraine are under fire.

While Republicans have largely defended Trump, they sounded alarms over his decision to pull U.S. troops out of northeast Syria — a move that paved the way for Turkey to invade and assault the Kurds, who’d fought alongside the U.S. in its campaign against Islamic State militants.

Upon landing in Texas on Thursday, Trump credited his threat of sanctions on Turkey and the violence that has taken place for the announcement of a cease-fire, though critics say the deal largely solidifies Turkey’s position and aims. Still, Trump described the cease-fire as an “incredible outcome” that could not have occurred “unless you went somewhat unconventional.”

Meanwhile, Trump’s would-be challengers are deep in an increasingly contentious race for the Democratic nomination.

One of those candidates, former Texas Rep. Beto O’Rourke, was holding a counter-rally protesting Trump’s appearance in nearby Grand Prairie Thursday evening. He did the same when Trump held a rally in El Paso in February and drew a substantial crowd, but his standing in the race has since fallen.

Still, Trump make sure to call him out, pointing to his plan to confiscate assault-style rifles and his support for rescinding the tax-exempt status for churches and charities that are anti-LGBTQ.

“No religion and no guns. I think that’s not good,” Trump said. / gsg