Myca Ulpina’s mother hopes she would be the last victim of the drug war
By: Patricia Denise M. Chiu - Reporter / @PDMChiuINQ
Philippine Daily Inquirer / 05:08 AM October 18, 2019 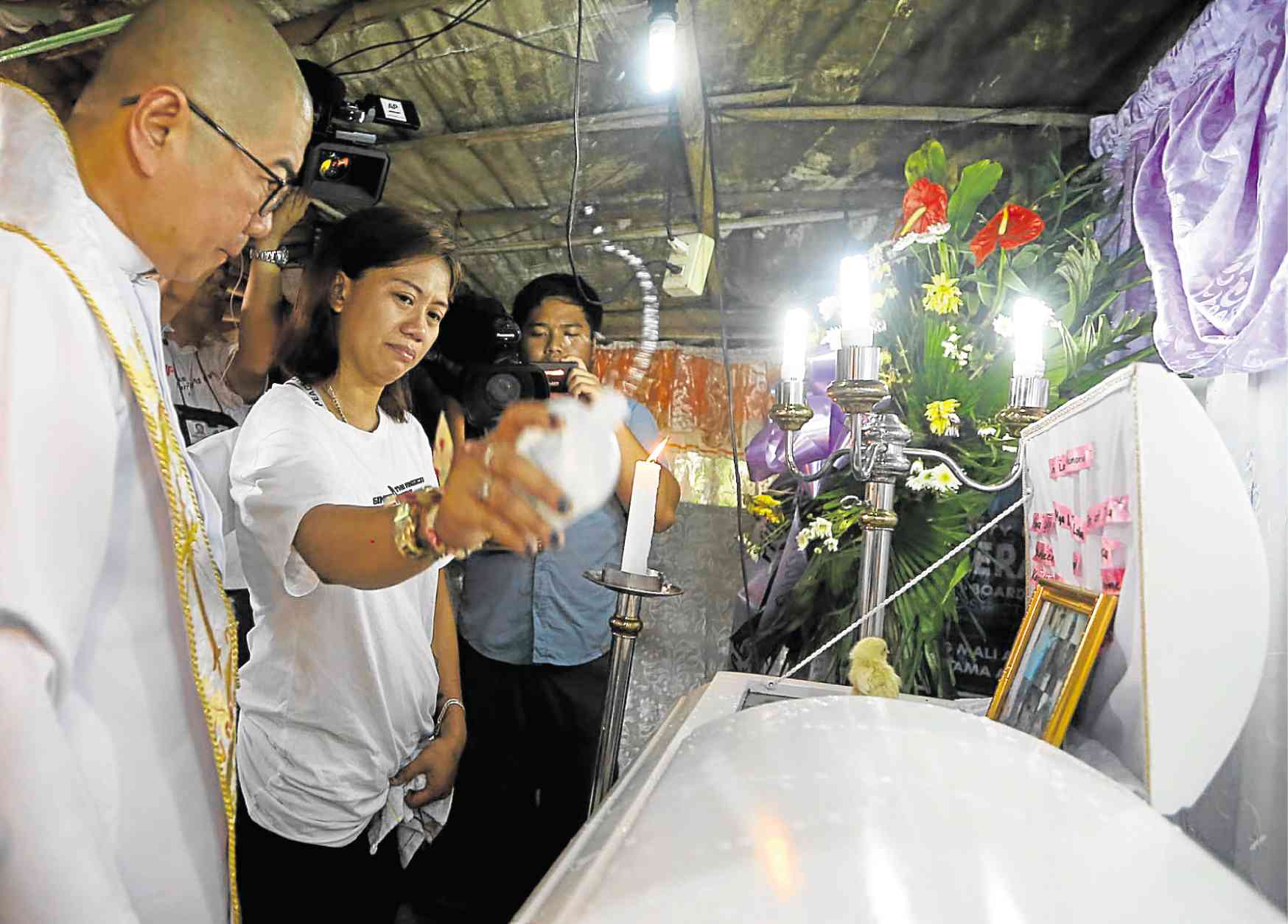 DRUG WAR CASUALTY Leejay Acopio sprinkles holy water on the coffin of her 3-year-old daughter, Myca Ulpina, who was killed in a police operation that targeted the girl’s father in Rodriguez, Rizal, on June 29. —AP

The police chief of Rodriguez, Rizal, and 39 others are facing charges of murder and obstruction of justice over the June 29 killing of 3-year-old Myca Ulpina in the government’s antidrug war.

“I hope Myca is the last victim of this drug war. She was only 3 years old, she was very young,” Ulpiana’s mother, who used the alias “Tess” for her own security, told reporters.

Tess filed charges of murder against Lt. Col. Resty Damaso, chief of the Rodriguez town police, and 13 of his men; and Lt. Col. Noel Campos, chief of the Rizal provincial police’s Intelligence Branch, and six of his men, in the Office of the Ombudsman.

She also filed separate charges of obstruction of justice against 19 other police officers from the Rodriguez municipal station, Police Regional Office 4-A Scene of the Crime Operations, Regional Investigation and Detective Management Division, and Philippine National Police Internal Affairs Service.

Myca was killed with a bullet to her neck while policemen were chasing her father, Renato, following a failed drug bust in Rodriguez on June 29.

Renato and an unidentified suspect reportedly opened fire at the policemen after recognizing the buyer as a government agent.

While fleeing, Renato picked up Myca, who was then hit by a bullet. She died in the hospital the next day.  Renato, his alleged cohort Enrique Cawilig and a police officer were also killed in the operation.

Lawyer Katherine Panguban of the National Union of People’s Lawyers, who accompanied Myca’s mother at the Ombudsman, said the filing of obstruction of justice charges had been prompted by police claims after Myca’s killing.

“They came up with a report saying Myca’s death was a case of homicide, since she allegedly was used as a human shield,” she said.

Panguban also pointed to the lapses in the gathering of evidence gathering that may have resulted in a police coverup,

Drug personalities killed in antidrug operations between July 2016 and June 2019 reached 5,526, according to the government’s “validated” TheRealNumbersPH.

The PNP, however, reported a higher number of 6,600 deaths in police drug operations. Human rights groups estimated the deaths at more than 25,000.

The higher number of deaths, reports said, were “unofficial data” of the PNP and had not been verified with  Philippine Drug Enforcement Agency.

Read Next
Angara: Why not legalize motorcycles-for-hire?
EDITORS' PICK
Smart launches new LTE-Advanced Pocket WiFi Plans starting at P699 per month
Cherry Mobile teams up with Cloud Panda PH, launches online store
‘A day in the life of frontliners’: Twelve-year-old girl creates a COVID-19 related illustration
DOH starts release of compensation for virus-hit health workers
COOCAA TV Bounce Back Sale offers up to 50% off
Twitter blocks Trump campaign video on Floyd
MOST READ
Motorcyclist accompanies bike-riding fiancé to work from Cavite to Makati
Lacson to Duque: ‘Just go’
‘Ang Probinsyano,’ other ABS-CBN programs to return as new channel set to emerge
Duterte lambasts Trillanes anew: ‘You did nothing but glorify yourself’
Don't miss out on the latest news and information.