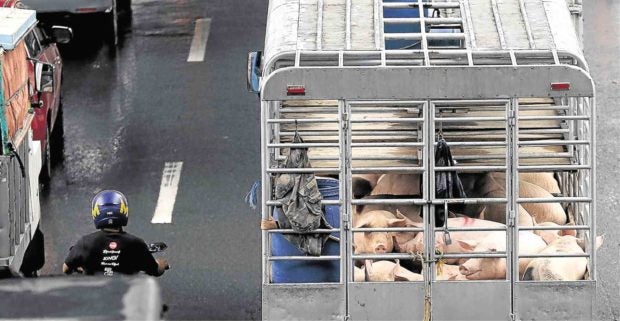 SLAUGHTERHOUSE TRIP A truck transports pigs to a slaughterhouse in Metro Manila. —RICHARD A. REYES

CEBU CITY—The provincial government of Cebu will continue to stop the entry of pork products from other provinces despite Interior Secretary Eduardo Año’s order lifting the ban that local governments had imposed on processed meat products following an outbreak of African swine fever in some areas in Luzon.

“All five executive orders in so far as [African swine fever] prevention is concerned shall continue to be enforced,” Cebu Gov. Gwendolyn Garcia told reporters here on Wednesday.

While she has high respects for Año, Garcia said she could not abandon her duty to protect the interests of Cebuanos.

“I believe that as governor of Cebu, my mandate and my responsibility is to protect the province of Cebu, the Cebuanos and our P10.9-billion hog industry upon which thousands upon thousands of Cebuanos depend for their livelihood,” she said.

Garcia said her office was drafting a position paper against the memorandum circular issued by Año. The secretary said he issued the circular to prevent an “unwanted disruption” of trade and commerce in the country.

Garcia said there were no signs that swine fever cases in Luzon had been contained.

“Right now, [swine fever] is spreading to other provinces in Luzon. It has not been contained. If indeed it has been contained, then it will only be confined to Rizal and only to the four barangays [in that province],” she said.

The province is the largest pork producer in Central Visayas region and fourth in the country, with Cebu “lechon” (roast pig) as a major delicacy. 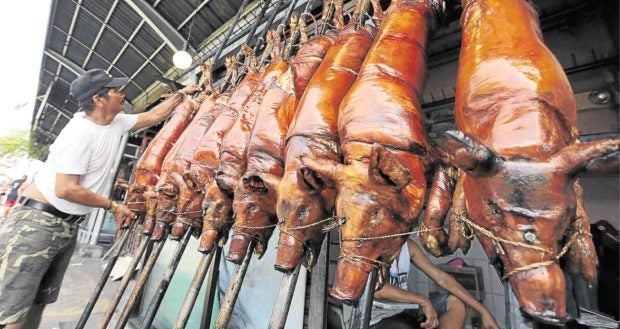 PORK FEAST “Lechon” (roast pig) is the preferred fare in “boodle fights” and feasts that local governments and hog raisers hold to prove that pork is safe to eat amid the scare generated by the African swine fever. —GRIG C. MONTEGRANDE

In Cavite, the provincial government is studying proposals to impose a “lockdown” on areas possibly hit by the swine fever to contain the spread of the virus.

Suspicions that swine fever had already reached Cavite arose following the death of 31 pigs in a backyard farm at Barangay Emmanuel Bergado 1 in Dasmariñas City.

In a telephone interview on Thursday, Cavite Gov. Juanito Victor “Jonvic” Remulla said provincial officials had yet to receive reports of similar cases in other farms in the province, as local governments were awaiting confirmatory test results on the cause of death of pigs in Dasmariñas.

“We might consider a lockdown … There are protocols to follow and we’re just still waiting [for the test results],” Remulla said.

Department of Agriculture (DA) and Bureau of Animal Industry officials have yet to confirm the cause of death of the pigs. DA spokesperson Noel Reyes, in a phone interview on Wednesday, said he had yet to receive a report on this matter.

Dasmariñas Rep. Elpidio Barzaga declined to confirm whether the deaths were due to swine fever, but said the situation was being handled by the DA.

Winifredo Dedase, Emmanuel Bergado 1 village chief, said the carcasses were buried immediately while the farm, where the 31 pigs died, was disinfected.

In Pampanga, 60 lechon and various pork dishes like “tocino” and “sisig” were served in the City of San Fernando this week to assure the public that it was safe to eat pork amid the health scare caused by the swine fever.

The provincial government of Pampanga and several private companies organized the “boodle fight” where 3,000 people feasted on the prepared meals.

According to Dr. Eloisa Vidar, Department of Health coordinator, the swine fever virus does not infect humans.

Toto Gonzales, spokesperson for the Pampanga Swine Producers Association, said his group “remains vigilant and active in dealing with the challenge of [swine fever] to protect our industry and the consuming public.” —WITH REPORTS FROM TONETTE OREJAS AND YOLANDA SOTELO