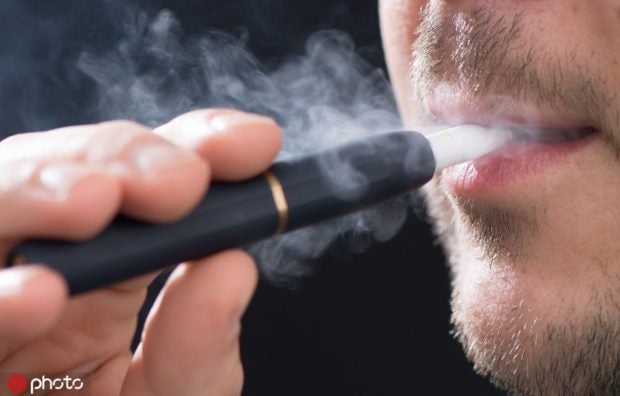 BEIJING — Beijing resident Chen Wei had smoked regular cigarettes for 15 years before turning to electronic ones 18 months ago.

Now, he has become a loyal fan of those with a blueberry flavor and has given up traditional cigarettes.

“I was introduced to e-cigarettes by friends,” he said. “I tried them and found them just as good. Also, smoking them will not pollute the air as much as regular cigarettes do. I also like the taste.”

In the past two years, e-cigarette companies have mushroomed in China, attracting a huge influx of capital as an industry with plenty of potential.

Using e-cigarettes, also known as vaping, is generally viewed as being potentially less damaging to health than tobacco, and can work as an alternative to help people stop smoking.

This view is supported by leading health agencies in countries such as the United Kingdom and New Zealand. Other observers, including some politicians and health experts in the United States, deny that it can help people to quit and say that it can also cause harm to health.

Most e-cigarettes in China use an electronic atomization system that contains nicotine. The cigarette transforms a liquid containing nicotine or spice solution into a vapour that can be inhaled.

To appeal to consumers, most brands tout the health benefits of e-cigarettes along with the variety of flavours available.

By Sept 19, more than 2,000 e-cigarettes companies had been formed this year, according to Chinese corporate information data provider Tianyancha. It also said that there are nearly 9,500 such companies in China, with about two-thirds of them based in the southern province of Guangdong.

Moreover, a large amount of capital has been invested to back the development of domestic e-cigarettes brands. Last month, the MOTI brand received financing of $50 million, while in July, the SSSO brand obtained $25 million in its first round of financing. Many other brands are also supported by invested capital, including RELX and Flow.

An estimated 90 per cent of global e-cigarette production is based in Shenzhen, Guangdong.

Most e-cigarette products and accessories made in China are exported, while fewer than 1 per cent of the country’s smokers use such cigarettes, according to a report by the Qianzhan Industry Research Institute in Shenzhen.

According to the Chinese Association on Tobacco Control, there are about 350 million smokers in China, the world’s largest producer and consumer of tobacco products.

Piachaud said, “Converting just 10 percent of smokers to e-cigarettes or (making them) dual users (e-cigarettes and regular cigarettes) could create significant category growth for companies on scales they would not be able to achieve in other markets.”

Han Shaofeng, co-founder of the e-cigarette brand SSSO, which was founded last year, said the industry’s development in China is still at a very early stage, but he believes that the number of e-cigarette users will increase, whether in the domestic or overseas markets. SSSO’s main consumers are ages 20 to 35.

“Smoking e-cigarettes is convenient and doesn’t bother others,” he said. “Moreover, we have imported e-cigarette liquid from the United States that meets with US Food and Drug Administration approval, to make sure our products are safe.”

Han said the company was also working to improve the taste of e-cigarettes by using innovative technology.

SSSO has set up a research and development base in Shenzhen to strengthen the brand and its quality control. Consumers are also attracted by the fashionable designs of its products.

Han said SSSO, whose products are mainly sold offline, has about 50 stores in Jiangsu and Zhejiang provinces and in Shanghai, where consumers are more fashion-conscious. It aims to open 1,000 stores－80 percent of them in China－with the remainder overseas, especially in Southeast Asia, he said.

The RELX brand began mass production in April last year, since when its output has risen by about 160 times.

Figures from consultancy Euromonitor show that in the first half of this year RELX led the market in China, with a 44 percent share.

By the end of this year, it aims to increase this to 70 percent. According to the company, by the end of August, it had opened more than 600 stores and its products were being sold in 43 countries and regions across the world.

Stefan Zhang, special assistant to the CEO of RELX Technology, said the brand’s vision is to “create a better world by leveraging its advanced technology and design in an ethical way, and to use empathy to help adult smokers”.

The company has invested millions of dollars in R&D, and boasts a laboratory with imported equipment and a team of scientists to ensure that all of its products comply with some of the strictest standards in the world, including those of the European Union, for e-liquid and vapour quality, he said.

RELX sells more than 20 e-liquid flavours across its four product lines, including a smart device that features a child lock paired with a companion app.

Piachaud, from Kantar, said that while there are restrictions on advertising of e-cigarettes across many forms of media, “digital and social advertising” in China can spread word of mouth quickly and effectively. It also plays on the rising trend of customization and personalization in the country.

“A wide array of flavors can give an ever-changing experience to consumers who may have become bored with traditional cigarettes,” he said.

Furthermore, the ability to alter the amount of nicotine can also help consumers to reduce consumption, give them more balanced choices and make them feel more in control, he added.

Many of the big players have not yet cemented their grip on China, and the market is poised to consolidate around just a few key brands.

“While this provides an opportunity, the lack of law and regulations to date has led to many safety concerns,” Piachaud said.

In the US, e-cigarette companies are being scrutinized over two public health concerns considered by politicians to be related to vaping－underage use among teenagers and a series of lung diseases nationwide that have affected more than 1,000 people.

According to the US Food and Drug Administration, 3.62 million middle school and high school students in the country were using e-cigarettes last year.

New regulations at different levels have been issued to stop the sales of various flavours that were attracting teenagers. On Oct 9, Chinese e-commerce company Alibaba said it would stop selling e-cigarettes in the US, in line with the similar decision by Walmart.

China has also made progress in regulating the industry. In July, the National Health Commission said legislation is being planned to supervise e-cigarette sales as part of overall tobacco control efforts as use of the products rises among young people.

Mao Qun’an, head of the commission’s planning department, said, “To reduce the prevalence of tobacco, we must prevent adolescents from trying it. But e-cigarettes can easily lure youngsters and turn them onto traditional tobacco later.”

He said increased supervision of e-cigarettes is needed. They can cause harm to health, like conventional cigarettes, as the flavoured vapour they produce contains toxic substances, and smokers can become addicted to the nicotine.

Some 0.9 per cent of people in China were e-cigarette users last year, compared with 0.5 percent in 2015, according to a survey released by the Chinese Centre for Disease Control and Prevention in May. The number of users in the country age 15 or older was estimated at 10 million, according to the survey.

Some cities have recently introduced legislation on e-cigarettes. In June, authorities in Shenzhen passed a regulation to add e-cigarettes to the city’s smoking control list, banning their use in indoor public areas.

Han, from SSSO, said the US is aiming to stop companies who are making inferior e-cigarettes or targeting young people, and this measure is needed.

As for the upcoming new national standards and related policies in China, Han said this means that the “era of brutal growth” in the e-cigarette industry is coming to an end.

“Some manufacturers whose products are not up to standard will be eliminated, and the real competition in the industry will not officially begin until then,” he said.

Zhang, from RELX Technology, said he believes the new regulations introduced by the government will be based on a full understanding of the industry, will help it to advance in a healthier manner and give entrepreneurs a proper chance to develop their business.