Temperatures taper off in typhoon-hit areas in Japan 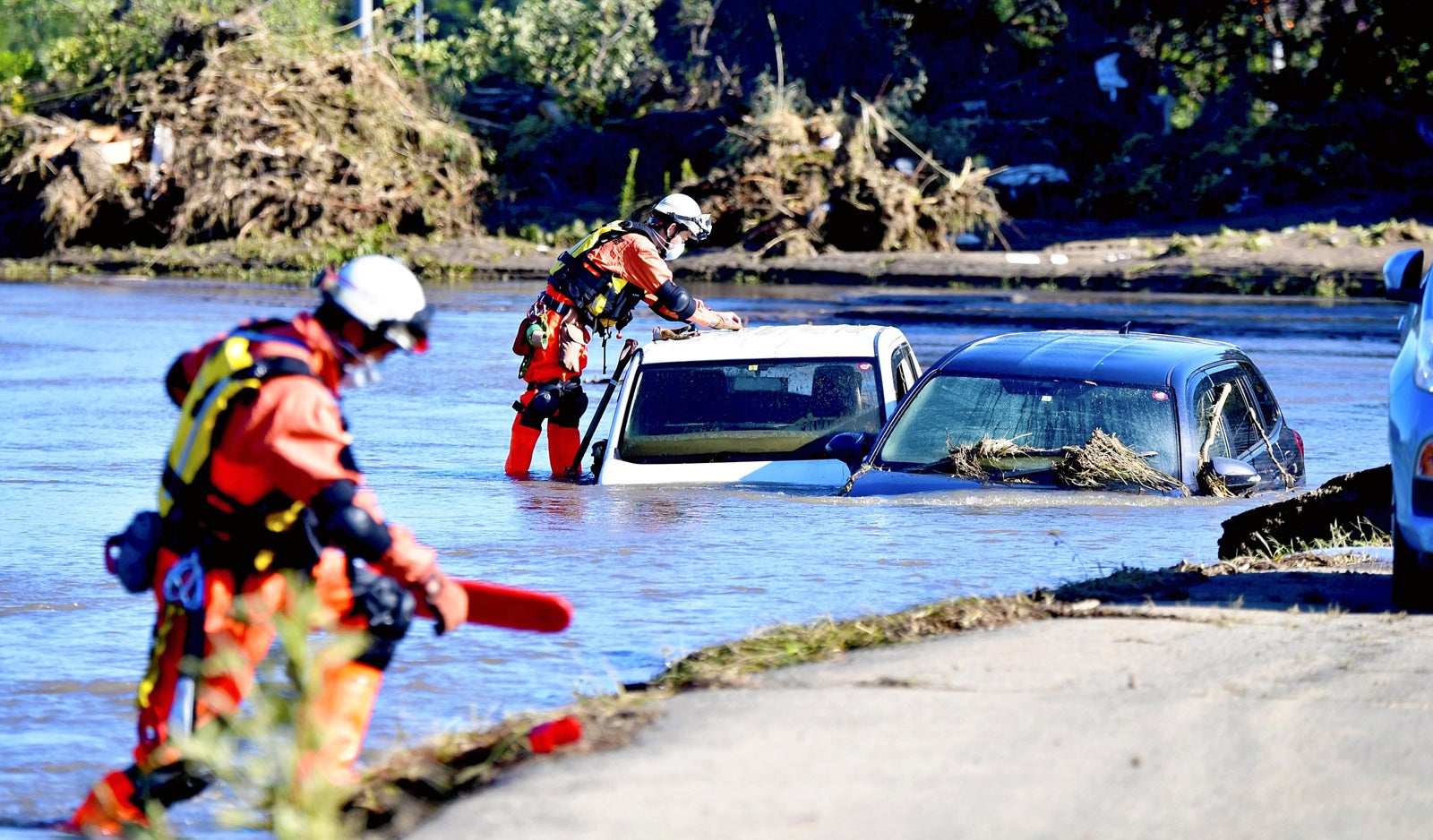 Firefighters search for missing victims as the water from Typhoon No. 19 starts to recede in Marumori, Miyagi Prefecture, on Wednesday. The Japan News/Asia News Network

TOKYO — Evacuees were shivering in shelters on Wednesday after temperatures dropped to their lowest figures of the season across almost all of Miyagi Prefecture in the aftermath of the record rainfall during Typhoon No. 19, which hit the Tohoku region this past weekend.

Fifteen people are still missing, according to The Yomiuri Shimbun’s count, and police and rescue teams continue to search for them.

The Japan Meteorological Agency warns of heavy rain along the Pacific side of the Tohoku region this weekend.

According to The Yomiuri Shimbun’s count, 75 people had died and 15 people were unaccounted for as of 11 a.m. on Wednesday across 12 prefectures due to Typhoon No. 19.

The mercury dropped to the season’s lowest at 21 of the 22 observation points in Miyagi Prefecture on Wednesday morning, the meteorological agency said. Temperatures more resembled those seen in late October to mid-November. In Marumori, Miyagi Prefecture, where most of the town was inundated, the temperature dropped to 5.4 C, the lowest for this season.

According to the government’s emergency disaster management headquarters, as of 6 a.m. Wednesday, there were 4,444 evacuees in 13 prefectures.

A breakdown by prefecture saw Fukushima with the highest number of evacuees at 1,769, followed by Nagano with 922 and Miyagi at 775.

Heaters were supplied to evacuation centers, and residents wrapped themselves in blankets and huddled around them to stay warm.

The meteorological agency is warning of heavy rains in the Kanto region and along the Pacific side of the Tohoku region for this weekend, possibly leading to landslides and rising river levels.

According to the Land, Infrastructure, Transport and Tourism Ministry, train services on 20 routes operated by eight railway companies were partially suspended as of 7 a.m. on Wednesday. It is expected to take one or two weeks for the Hokuriku Shinkansen line, which saw tracks and train centers inundated, to resume direct service between Tokyo and Kanazawa.

As for local trains, the Tadami Line, which connects Fukushima and Niigata prefectures, resumed service on Wednesday morning, while operations on some portions of the Chuo and Tohoku lines have been suspended.

According to the Economy, Trade and Industry Ministry, about 12,240 households across nine prefectures, including the Kanto and Tohoku regions, were without power as of 5 a.m. on Wednesday.

The search for the missing continued in areas affected by Typhoon No. 19, even though 72 hours — a point after which survival rates drastically drop — had passed since the storm.

In the town of Marumori, Miyagi Prefecture, police, firefighters and Self-Defense Forces personnel, among others, started search operations in the early morning hours.

As of Wednesday at 10 a.m., the number reported missing was three, and the town office had received reports that contact has not been made with some people.

“We do not yet have a full grasp of the overall scope of things,” Marumori Mayor Kunio Hoshina said.

In an area in Koriyama, Fukushima Prefecture, police and firefighters continued to search for a fourth-grade boy who went missing while riding in a vehicle with his mother and his first-grade-age brother from the village of Tenei in the prefecture.

The 36-year old mother and the younger boy were found dead.