Bohol now under calamity state due to El Niño 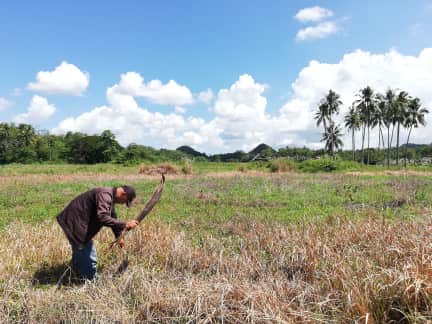 A farmer attends to his farm in Bohol prov­ince amid the ongoing El Niño that has caused massive agricultural damage. Leo Udtohan/Inquirer Visayas

TAGBILARAN CITY, Bohol –– Bohol has been placed under a state of calamity due to the effects of El Niño on its farms.

The Bohol Provincial Board approved on Tuesday the recommendation of the Provincial Disaster Risk Reduction and Management Council to place the province under a state of calamity after assessing the affected areas.

With the declaration, the local governments can start releasing their calamity funds to help affected sectors, particularly the farmers whose crops and livestock have been affected by the drought.

He said the damage to Bohol’s agriculture caused by El Niño had reached P179 million.

At least 100,000 farming families had been affected, he added.

Known as the rice granary of Central Visayas, Bohol produces 75 percent of the region’s rice requirement.

Its 46,587 hectares of rice farms account for 25 percent of the province’s agricultural lands.

Of these rice fields, 24,000 ha are irrigated and the rest rely on rain.

The drought has also affected the water levels of four irrigation dams: Malinao in Pilar town, Bayongan in San Miguel town, Capayas in Ubay town, and Zamora in Talibon town.