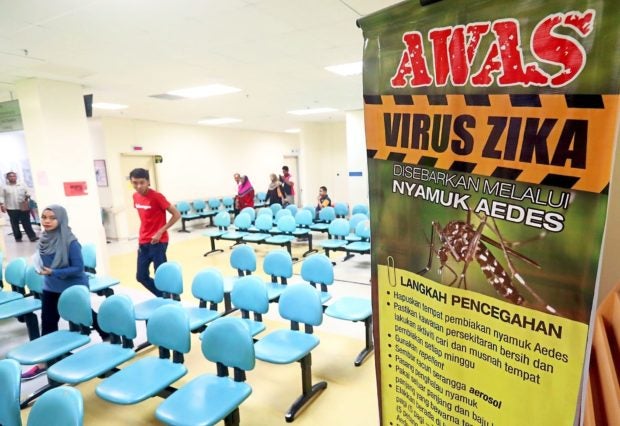 Taking precautions: A bunting warning on Zika disease is seen at Hospital Sungai Buloh. The Health Ministry has confirmed that a man in Perak has been infected with the disease.

PUTRAJAYA — A man in Perak, Malaysia has been infected with Zika, a viral disease transmitted by the Aedes mosquito. There has been no reported case for two years.The last case in Malaysia was reported in 2016, with eight people found infected with the virus, said health authorities.

On the latest incident, health director-general Datuk Dr Noor Hisham Abdullah said the ministry’s disease control division was alerted by the Perak health department on Oct 12 regarding a single suspected Zika case.“A test conducted by the Institute of Medical Research the next day found the result to be positive,” he said in a statement yesterday.

The patient is a 30-year-old and was hospitalized on Sept 27 after he showed symptoms such as vomiting and diarrhea.On Sept 29, he was transferred to the intensive care unit. The patient is still being warded and is reported to be in stable condition.

Dr Noor Hisham said the latest case brought the total number of recorded cases in Malaysia to nine, with eight of them recorded in2016.“ In 2017 and 2018, 3,178 blood samples and 15 urine samples were taken from patients who had the symptoms. The results were negative,” he said. This year as of Oct 5, 2,144 blood and 38 urine samples were tested. All came out negative.

Zika is spread by Aedes, the same mosquito that spreads dengue and chikungunya, with common symptoms including fever, rash, joint and muscle pain and conjunctivitis.

Babies of zika-infected mothers risk being born with microcephaly -– a condition in which the brain does not develop properly, which leads to the baby’s head being noticeably smaller than normal.

A Zika epidemic in Brazil in 2015 saw over 2,000 cases of microcephaly suspected to be linked to the virus, resulting in the World Health Organization declaring the situation as a public health emergency of international concern.

Fortunately, a pregnant woman in Johor Baru who was infected in 2016 eventually gave birth to a normal baby girl.

Dr Noor Hisham said the public should undertake preventive measures including cleaning their surroundings and destroying mosquito breeding sites.Using aerosol sprays to kill adult mosquitoes, using repellent and dressing appropriately are some of the measures recommended by authorities.

“It is also advisable to refrain from visiting countries that have zika cases,” he said, adding that those who fall ill after returning from countries with such cases should seek medical attention.

There is currently no vaccine for Zika, and chikungunya, while more clinical trials and research are needed to develop a highly effective dengue vaccine.

“Destroying Aedes breeding sites will prevent not only dengue, but also Zika and chikungunya,” he said.