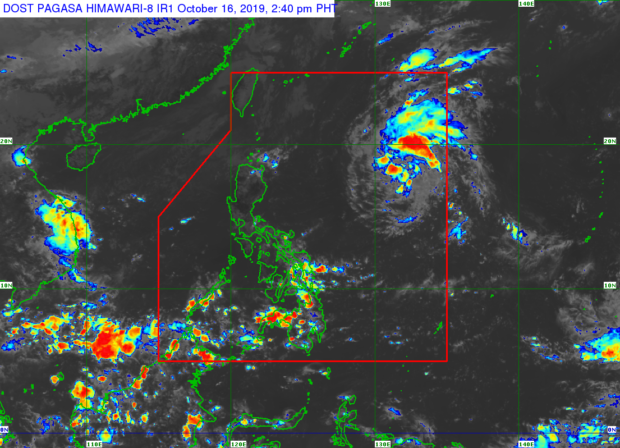 In a thunderstorm advisory released 2:26 p.m., the state weather bureau said the rain showers are expected over Zambales, Pampanga, Laguna, Batangas, Rizal, and Quezon within the next two hours.

The rain showers will be accompanied by lightning and strong winds, Pagasa added.

“All are advised to take precautionary measure against the impacts associated with these hazards which include flash floods and landslides,” Pagasa said.

Moderate to heavy rain showers with lightning and strong winds are expected over #Zambales, #Pampanga, #Laguna, #Batangas, #Rizal, #Quezon within the next 2 hours. pic.twitter.com/LqsXDYCcX3

The state weather bureau on Wednesday morning said that the low-pressure area (LPA) spotted east of Baler, Aurora has intensified into a tropical depression, which was named “Perla.”

As of 10 a.m., Perla has maximum sustained winds of 45 kph near its center and gustiness of up to 55 kph.