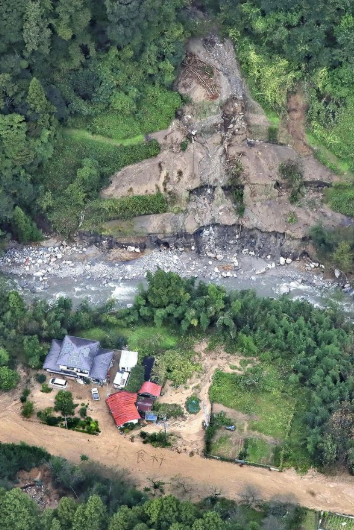 The kanji characters for “Water” and “Food” arranged using driftwood are seen at the bottom of the image near houses affected by the disaster in Marumori, Miyagi Prefecture, on Tuesday. The Japan News/Asia News Network

TOKYO — Search and rescue operations are continuing in eastern Japan after record downpours in the wake of Typhoon No. 19 caused widespread devastation in the region.

According to data collected by The Yomiuri Shimbun, as of 6 p.m. Tuesday, the disaster had claimed the lives of 75 people in 12 prefectures and 16 people were missing. The Tohoku region has seen extensive casualties with more than half of the victims killed in Fukushima and Miyagi prefectures.

In Marumori, Miyagi Prefecture, floodwater in the central part of the town has started to recede but some areas are still underwater. The full scale of the damage is yet to be established.

In areas where embankments had been breached, search and rescue operations are continuing round the clock, as the survival rate of trapped victims is said to fall sharply beyond the 72-hour mark.

In Fukushima Prefecture, 22 bodies were found inside houses and elsewhere after floodwater had receded from residential areas. The death toll in the prefecture is 27, the highest so far among the disaster-hit areas. Many of the victims died in flooded areas along the Abukumagawa river, which runs north to south through the central part of the prefecture, including Motomiya, Koriyama and Sukagawa.

On Saturday night, a car carrying four family members fell into the Kushikawa river in Sagamihara, Kanagawa Prefecture. In addition to the mother, 39, and the eldest daughter, 11, whose deaths had already been confirmed, the bodies of the father, 49, on Monday and the eldest son, 8, on Tuesday were found. The car was found on its side about two kilometers downstream.

The ministry has set up a panel of experts to investigate the cause of the embankment collapse along the Chikumagawa River.

According to the Economy, Trade and Industry Ministry, about 33,240 households in 10 prefectures were without electricity as of 2 p.m. Tuesday, including about 15,900 houses in Chiba and about 11,240 in Nagano.

In areas hit hard by flooding, it is expected to take about a week for restoration work to resume after floodwaters recede.

According to the Cabinet Office, 289 evacuation centers were supporting displaced residents as of 5 a.m. Tuesday.