SEOUL, South Korea – The Department of Tourism (DOT) is confident that it will hit its 8.2 million foreign tourist arrivals target for 2019. 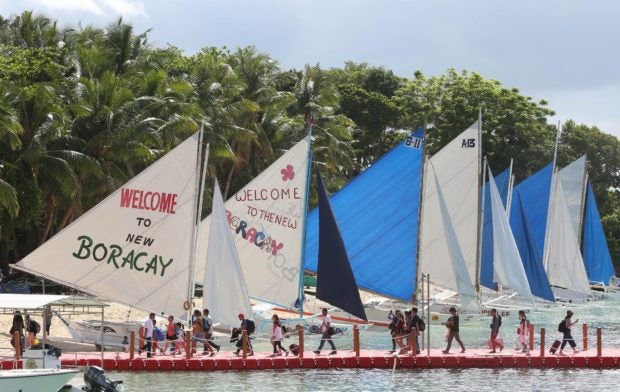 THEY’RE BAAAAACK Local and foreign tourists return to Boracay on its reopening earlier last year.  The resort island was closed to tourists for six months for cleanup and rehabilitation, and now limits the number of visitors to about 6,000 a day. —MARIANNE BERMUDEZ

The DOT reported earlier this week that foreign tourist arrivals in the Philippines breached the 5 million mark this August.

In an interview at the sidelines of the Asean-Korea Train Tour here, Tourism Assistant Secretary Renaldo Ching said they are expecting more tourists to visit the country during the Christmas holiday season.

“Ang target natin is 8 million.  As of June nakaka-50 percent na tayo so on track naman. Kung until June is 50 percent, ineexpect natin na July to December which is datingan din yan, holiday season din kasi yan so malamang mareach natin yung target arrivals (Our target is at around 8 million and as of June, we have already reached 50 percent. We are expecting more tourists from July to December as it is when tourists usually visit the country and because of the holiday season),” Ching told INQUIRER.net.

Tourism Assistant Secretary Reynaldo Ching says the Philippines is on track to reach its 8.2-million foreign tourist arrivals for 2019.

The DOT has recorded more than 4.1 million foreign tourist arrivals in the first half of the year.

South Korea remains the top source of tourists with 1,113,274 visitors from January to July. /gsg