1 dead, 2 injured as motorcycle smashes into tree in Davao Sur 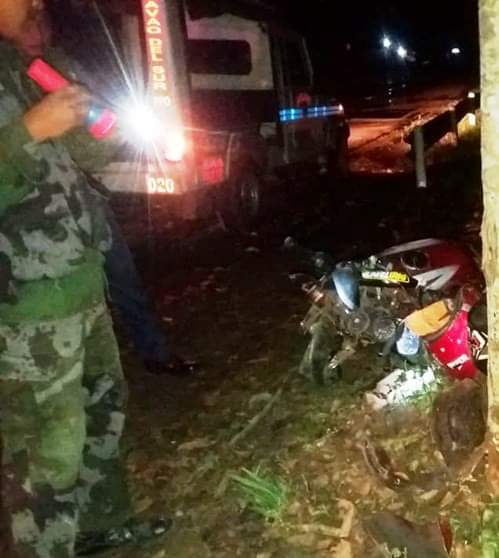 The wrecked motorcycle driven by Reyfygi Jacinto Carsolin, 25, who died after the vehicle smashed against a narra tree along the roadside of Barangay Kanapulo in Magsaysay, Davao del Sur. CONTRIBUTED PHOTO

DIGOS CITY –– A motorcycle driver died while his two back riders were injured when their vehicle slipped off the road and smashed against a narra tree in Barangay Kanapulo, Magsaysay town, Davao del Sur shortly before midnight on Monday.

Police Captain Jeffmar Tercero, chief of the Magsaysay town police, said Reyfygi Jacinto Carsolin, 25, a resident of Poblacion Antipas, Cotabato province, was driving his Kawasaki Baja motorcycle along the national highway towards Davao City when he lost control of the vehicle which slipped off the road and smashed against the narra tree by the roadside.

Emergency responders rushed the three to the Centeno Medical Specialist Hospital in Bansalan town but the attending physician declared Carsolin dead on arrival.