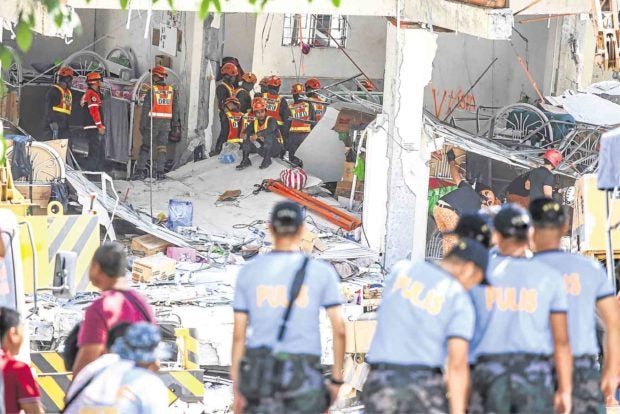 CITY OF SAN FERNANDO, Pampanga, Philippines — The special task force that the Department of Public Works and Highways (DPWH) formed to investigate the collapsed Chuzon Supermarket in Porac town, Pampanga province, has found multiple structural and documentary defects that caused it to cave in during an earthquake on April 22.

In its findings, the task force said the damage sustained by the supermarket was caused by the failure to comply with required referral codes, design plans and specifications, and proper construction supervision.

Its final investigation report was submitted to Public Works Secretary Mark Villar on May 28 but was released only on Tuesday.

Citing site observations and materials test results, the task force said the supermarket’s structure could have withstood the 6.1-magnitude quake if it had complied with the building code and specifications.

It had wanted the Department of Justice and other concerned agencies to evaluate the report and prepare a complaint for violations of Presidential Decree No. 1096 (National Building Code of the Philippines) and Republic Act No. 3019 (Anti-Graft and Corrupt Practices Act).

The task force, however, did not name the people liable for the violations or the degree of their liabilities.

Despite the findings and recommendations, only the National Bureau of Investigation had pursued cases against the supermarket’s owner, its contractor and local regulatory officials.

Cases of reckless imprudence resulting in multiple homicide and violations of the national building code and antigraft and corrupt practices law were filed in the office of the regional prosecutor here on Aug. 30.

A mother, her two young children and two women employees were killed while nine workers were injured when the building caved in as the 6.1-magnitude temblor occurred at a little past 5 p.m. on April 22.

No cases had been filed by the police’s Criminal Investigation and Detection Group although it requested for a copy of the task force’s report.

Eugenio Pipo Jr., the DPWH assistant secretary for regional operations in Luzon, and Edwin Matanguihan, the DPWH Bureau of Design assistant director and task force chair, said in separate interviews that they had no information whether complaints were filed as an offshoot of the task force’s investigation.

“It’s a technical probe. The judicial process is out of our hand,” Pipo said.

In its eight-page report, the task force found an unnumbered and unsigned building permit and unsigned permit plan.

The probe further showed that the supermarket’s “as-built” plan did not follow the permit plan and no amended building permit was issued despite major deviations from the two plans.

According to the task force, a wrong edition of the National Structural Code of the Philippines was used when the supermarket’s permit was applied in 2013. The structural design calculations did not also include seismic analysis.

Lateral ties at joint reinforcement, although planned, were not built. Splice location of bottom bars for beams and the length and bend of stirrup and tie hooks did not follow plans.

A sanitary pipe downspout inside columns and beams was not in the structural design analysis. There was not enough concrete cover in some areas.

The Chuzon Supermarket collapse was one of the reasons for the filing of a House resolution through which Agusan del Norte Rep. Lawrence Lemuel Fortun sought an investigation of the alleged smuggling and proliferation of substandard steel products in the country.

The Department of Labor and Employment gave 17 supermarket workers at least P20,000 each as livelihood assistance on Oct. 8.