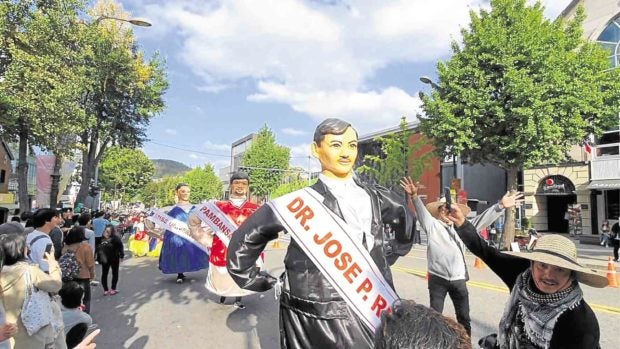 The “higantes” versions of these iconic figures from the Philippines were handcrafted by a group of local artists from Angono town in Rizal province for this year’s Itaewon Global Village Festival in South Korea.

Angono, also known as the art capital of the Philippines, was invited by the Philippine embassy in South Korea to send in its higantes to the popular Korean parade held on Oct. 12.

The Itaewon Global Village Festival annually features South Korea’s heritage but also cultures from other parts of the world.

It was the first time, Laca noted, that Angono’s higantes were flown overseas on an invitation by an embassy. A couple of times in the past, the higantes were featured in Japan or the United States, but in private art festivals, he said.

Angono has long been known for its Higantes Festival, a street parade of hundreds of giant effigies held every third week of November. Before 2013, the festival was celebrated as part of Angono’s Catholic feast in honor of its patron, St. Clement.

“There was this version [of history], which says that the higantes started way back Spanish [colonial times],” Laca said in a telephone interview on Tuesday.

He said it was believed that people used the higantes as a form of protest or mockery against the Spanish landlords.

“That was the town’s way of thanksgiving for surviving the depression during the war,” Laca said. —MARICAR CINCO