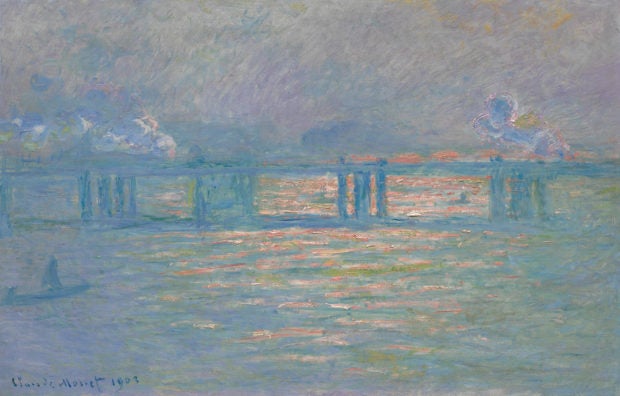 “Charing Cross Bridge” is one of the seminal London canvases Monet created during multiple trips to London that he undertook in the early 1900s. The canvas will be offered on Nov. 12 as part of Sotheby’s Impressionist & Modern Art evening sale in New York City.

This series was painted from the vantage point of Monet’s room at the Savoy Hotel, which the French artist found particularly advantageous to capture the city’s fog. “Charing Cross Bridge” which is characterized by its evanescent mix of color, light and shadow, is expected to fetch between $20 million (around P1.03 billion) and $30 million (at least P1.5 billion) at Sotheby’s.

London’s Charing Cross Bridge remains one of Monet’s most emblematic subjects, as he revisited it in 37 canvases completed between 1899 and 1905. Several of them belong in the collections of international institutions, such as the Art Institute of Chicago, Boston’s Museum of Fine Arts and the Thyssen-Bornemisza Museum in Madrid.

This pre-sale high estimate is well below the French Impressionist’s auction record of $110.7 million (P5.7 billion), which was set last May at Sotheby’s New York for “Meules”.

As Sotheby’s pointed out, Monet’s paintings of the Charing Cross Bridge are still in private hands and rarely appeared at auctions.

The one offered for sale at Sotheby’s was purchased in 1977 by the late Andrea Klepetar-Fallek and Fred Fallek, hanging over their living room couch for more than 40 years.

The couple established a tradition of giving each other a piece of art for each birthday and anniversary, quickly assembling an impressive collection of paintings, drawings and sculptures. Among them are works by Pierre Bonnard, Edgar Degas, Lyonel Feininger, Jacques Lipchitz, Emil Nolde and more.

The Klepetar-Fallek Collection will be offered across both Sotheby’s evening and day sales of Impressionist & Modern Art, which are set respectively on Nov. 12 and 13.

Ahead of the auctions, all pieces from the collection will be on public view at Sotheby’s New York galleries from Nov. 1 through 12. CL/NVG