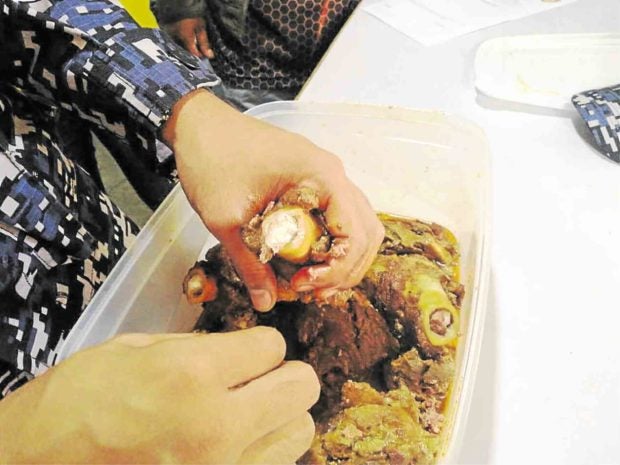 SURPRISE INGREDIENTS The drugs and SIM cards were found inside the marrow bones. —Bureau of Corrections Photo

MANILA, Philippines — A security team at the New Bilibid Prison (NBP) in Muntinlupa City has arrested a man after they found five sachets of “shabu” (crystal meth) and two SIM cards in the food he was delivering to a high-profile inmate at the maximum security compound.

According to case investigator Police Master Sergeant Noel Bulan, 43-year-old Glen Dayrit was being checked for contraband when one of the guards noticed a piece of plastic in the “adobong bulalo pata” ribs he was taking to Tyrone dela Cruz around 2 p.m. on Sunday.

“Instead of bone marrow, they found sachets of shabu, an aluminum foil supposedly to be used as a tooter and two SIM cards,” Bulan said.

He added that the SIM cards “looked like they were old and probably contained messages and contacts” but these could not be opened without a court order.

Dayrit, a driver residing in Angeles City, Pampanga, told the police that he had just been ordered to deliver the food and was unaware that it contained contraband.

Bulan said that Dayrit’s visit on Sunday was the fourth time he had delivered food to Dela Cruz. He had presented an ID card which identified him as Jeffrey dela Cruz.

According to Maj. Peter Aquino, chief of the Muntinlupa police station drug enforcement unit, Dayrit would be formally charged today for illegal possession of drugs and drug paraphernalia.

Police were still investigating who hired him to deliver the food but their initial investigation pointed to “someone just around the Bilibid complex.”

Tyrone dela Cruz has been at the NBP since December 2017 after he received a life sentence for the August 2013 kidnapping of a Chinese-Filipino couple in Laguna.

He was the leader of a crime gang involved in kidnap for ransom, carjacking and robbery cases in Laguna and Cavite.

In July 2018, the Anti-Kidnapping Group of the Philipine National Police discovered that he had masterminded the abduction of a Chinese businessman in Cabuyao, Laguna, even from behind bars.

With his accomplices, who included Bureau of Corrections personnel, he was able to negotiate a P15-million ransom for the victim.

Tyrone dela Cruz is detained at Building 14 which houses high-profile convicts, including the “Bilibid 19,” or drug lords who were found to be living luxurious lifestyles inside their “kubol” (private quarters) during a 2014 raid.