MANILA, Philippines — At Barangay Bagong Silangan in Quezon City, Julie Ann Ragum lined up starting at 8 a.m. on Monday with over 100 other parents who wanted to have their children immunized for free against polio and other diseases.

“I’m here because I want to make sure that my son does not contract the virus,” said Ragum, who was with Jeff, her 2-year-old son.

Lorna Reyes Lambino, a nurse from the city health center, said that aside from the oral polio vaccine (OPV), they also decided to offer measles, pentavalent and Bacille Calmette-Guerin (BCG) shots.

A BCG vaccine helps prevent tuberculosis meningitis while pentavalent is a five-in-one vaccine that protects against life-threatening diseases such as diphtheria, pertussis, tetanus, hepatitis B and Hib, or haemophilus influenzae type b.

In Manila, health workers went on a house-to-house drive to offer OPVs to children below 5 years old.

The campaign, ongoing until Oct. 27, aims to immunize the over 91,000 kids in the city for a 100-percent coverage, according to Manila Health Department chief Arnold Pangan. As of August, the coverage rate was only around 54 percent.

The free vaccination drive in the two cities was part of the Department of Health’s (DOH) nationwide “Sabayang Patak Kontra Polio” program which was launched on Monday.

Health Secretary Francisco Duque III asked parents, particularly those in high-risk areas like the National Capital Region and Mindanao, to cooperate and ensure that their children would receive the OPV. 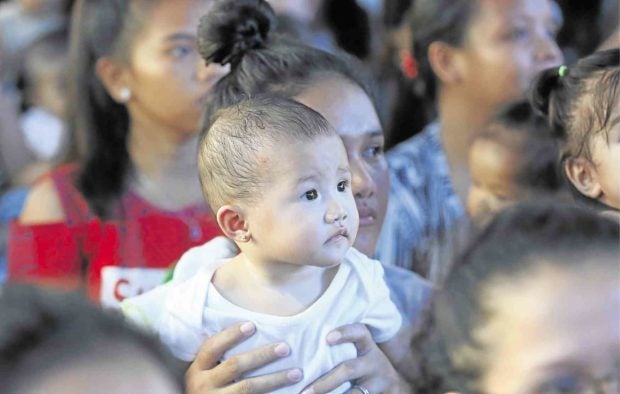 IMMUNIZATION DRIVE Parents wait for their turn to have their children vaccinated against polio at the Batasan Hills barangay hall in Quezon City. —NIÑO JESUS ORBETA

The first recorded case of polio in two decades was detected in a 3-year-old girl from Lanao del Sur.

The DOH aims to vaccinate close to 1.3 million children in Metro Manila by Nov. 25.

Duque said that the campaign would then shift to Mindanao, ending on Jan. 6, 2020. All children below age 5 would be given three doses of OPV “regardless of their immunization status.” —With a report from Nikka Valenzuela