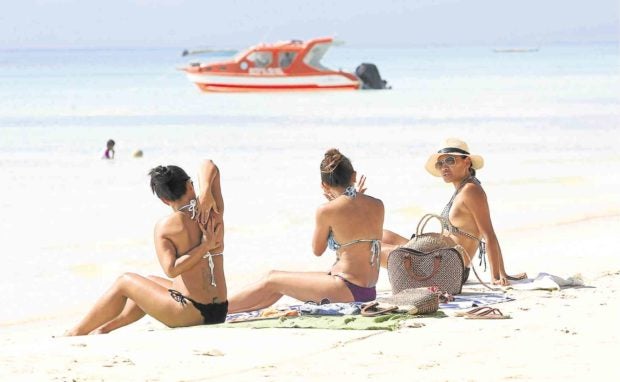 BEACH GETAWAY Local and foreign tourists enjoy the clear waters and powdery white sand of Boracay Island, one of the top beach getaways in the Philippines. —MARIANNE BERMUDEZ

The municipal council of Malay in Aklan province, where the world famous Boracay beaches are located, is mulling over an amendment to municipal ordinances to include a ban on public nudity.

“We will be discussing possible measures but among those is to amend existing ordinances or pass a new one,” Councilor Maylyn Aguirre-Graf told the Inquirer on Monday.

The planned measure was prompted by the controversial wearing of an extremely skimpy swimsuit by a Taiwanese tourist on Boracay beach last week.

The tourist wore a “microkini,” which barely covered her private parts. She drew various reactions when her photographs went viral on social media.

The tourist, who was with her boyfriend, was asked to report to the Boracay police on Thursday. They left the island on Friday after she paid a P2,500 fine.

But the imposition of the fine also raised questions as there was no existing ordinance prohibiting nudity or the wearing of skimpy attire on the beach or other public areas on the 1,032-hectare island.

According to some residents, the ordinance covers only photographers, and not tourists.

In the case of the Taiwanese tourist, she could have been fined for alarm and scandal under the Revised Penal Code.

Topless bathing mostly by foreign tourists was tolerated in Boracay until the early 1990s when there were still few tourists and residents on the island.

But the surge in visitor arrivals and population growth on the island also meant less secluded and private areas.

About a decade ago, local officials also proposed an ordinance prohibiting sex in public areas after tourists were filmed making love on the beach. But the proposed measure was not approved.

According to Natividad Bernardino, general manager of the Boracay Interagency Rehabilitation Management Group, which supervises the rehabilitation of the island, they support the passing of an ordinance on nudity and extremely skimpy attire.

“We want Boracay to be a family-oriented tourist destination. This is also why we stopped beach parties,” she said.

But an expatriate, who has been living on the island for decades, said passing such ordinance was “ridiculous,” adding that the town council should focus on many other “outdated ordinances on urgent concerns.”

“This was an isolated incident. They want to be holier than the Pope. It’s best we declare Boracay a monastery so they can ban tight shorts and skimpy bikinis,” said the expatriate, who asked not to be identified to avoid antagonizing local officials.