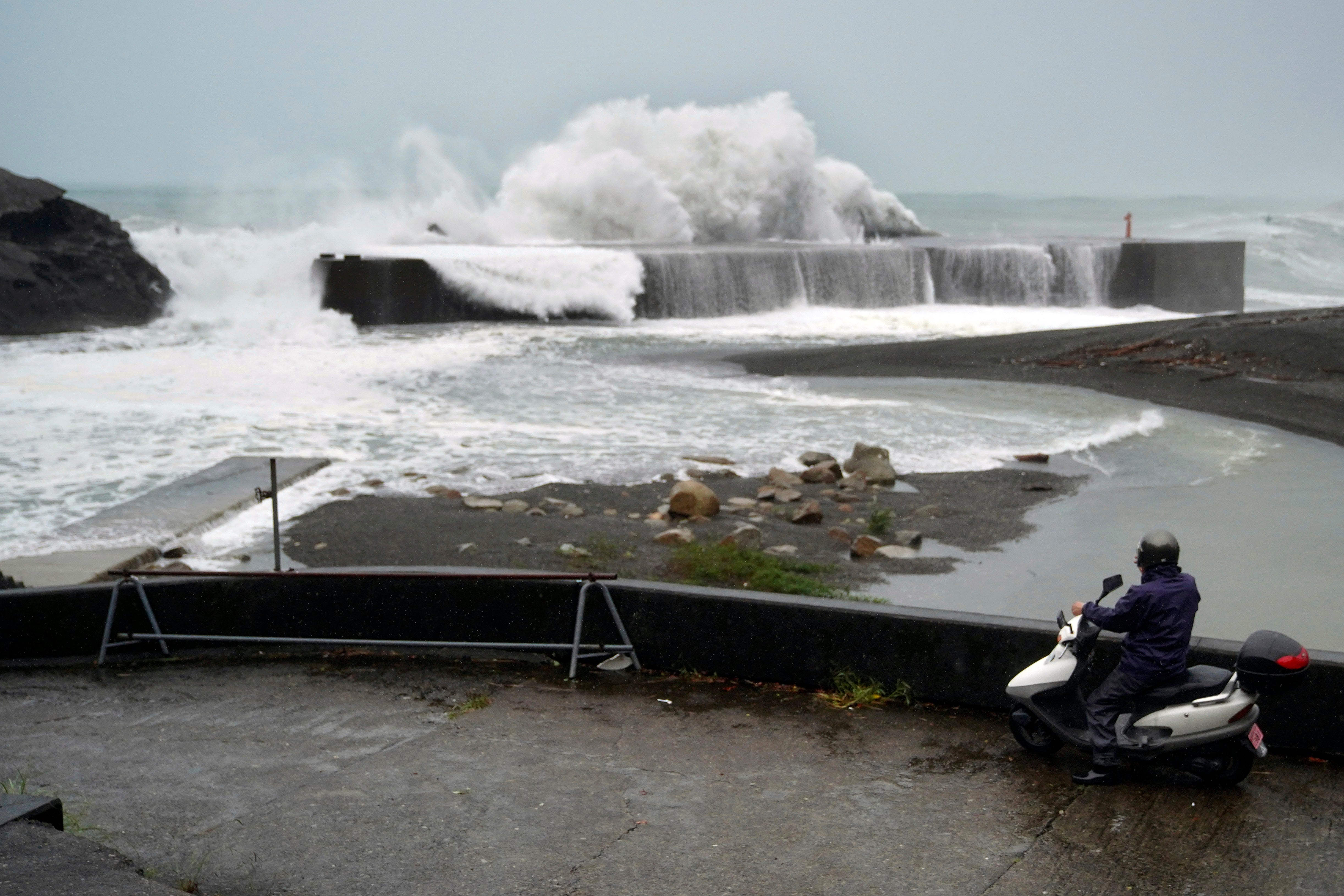 A man on a scooter watches as surging waves hit against the breakwater as Typhoon Hagibis approaches a port in Kumano, Mie Prefecture, Japan, Saturday, Oct. 12, 2019. (AP Photo/Toru Hanai)

It is forecast to crash into land in central or eastern Japan early Saturday evening, packing maximum gusts of 216 kilometers per hour (134 miles per hour) Japan’s Meteorological Agency (JMA) said.

Hagibis is forecast to be the first storm rated “very strong” to hit the nation’s main island of Honshu since 1991 when the category system was introduced, local media said.

It is also an unusually large storm, and expected to bring “brutal winds and violent seas” to large swathes of the country, the agency said.

The expected rainfall, in particular, has raised fears, with the JMA warning that high tides ahead of a full moon increase the risk of flooding.

It has issued warnings for strong wind, high waves, landslides and serious flooding for large areas of Honshu.

Non-compulsory evacuation orders have been issued to some 600,000 people in eastern Japan already, according to public broadcaster NHK.

With the center of the storm still hundreds of kilometers away in the Pacific, torrential rain was falling and tornado-like gusts of wind ripped into several homes in Chiba, east of the capital, destroying one.

The JMA has forecast half a meter (nearly 20 inches) of rain for the Tokyo area in the 24 hours to midday on Sunday, with more for the central Tokai region.

Television footage showed gigantic waves smashing into coastal breakwaters and residents living near a river in Tokyo piling up sandbags in front of their houses.

Others have nailed wooden boards to the frames of windows.

By 9:00am local time (0000GMT) 11,600 households in Chiba had already lost power. The region was badly hit by another powerful typhoon in September.

Automakers, including Toyota and Honda, have shut down their factories, and many supermarkets and convenience stores in the capital closed, a day after residents shopping for typhoon supplies emptied the shelves.

The storm could also jeopardize a key match-up between Scotland and Japan on Sunday. Officials are not expected to make a final decision on that match until Sunday morning, after they have assessed any damage to the venue and transport links.

The storm is also causing transport chaos over a long weekend in Japan.

Japanese airlines have cancelled more than 1,660 domestic flights and some 260 international flights on Saturday, NHK said.

Many bullet train lines from the capital will be suspended, along with both overground and some subway lines serving the Tokyo area.

The storm will even force the first-ever all-day typhoon closure of Tokyo’s Disneyland and DisneySea theme parks, with doors shut from Saturday until at least noon on Sunday.

Japan is hit by around 20 typhoons a year, though the capital is not usually badly affected.

Hagibis is bearing down on the region just weeks after another powerful storm, Typhoon Faxai, hit the area with similar strength, killing two and causing major damage in Chiba.

More than 36,000 homes were damaged or destroyed in Chiba, and the local government has urged those in damaged buildings to take shelter elsewhere during the storm.  /muf