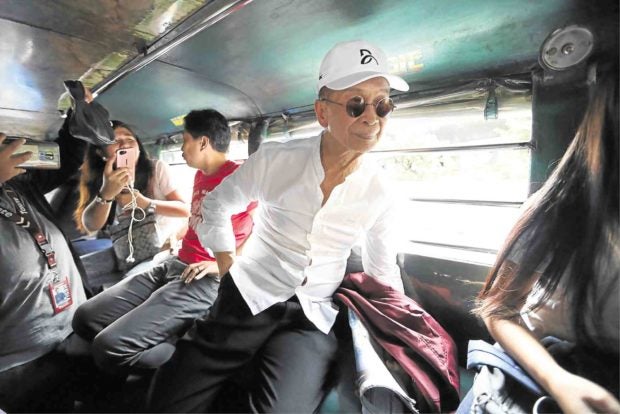 He’s no stranger to commuting that way, Panelo declared after taking what he earlier dismissed as a “silly challenge” and going on a four-hour trip Friday morning from his son’s Quezon City residence to Malacañang. The trip, he said, involved four jeepney rides and a hitch on a private motorcycle.

But netizens and media, who posted pictures of the official at various points of his trip, noted that for a supposedly veteran commuter, he wasn’t even dressed “properly.”

Who dares to wear white for what’s bound to be a grimy and sweat-soaked experience? they sneered, referring to Panelo’s attire.

The last leg of his commute—when a stranger offered him a ride on a motorcycle—also raised some eyebrows, since using motorbikes as public transport is still considered illegal under Republic Act No. 4136.

The Palace official, who left Quezon City at 5:15 a.m. and detoured to Marikina to avoid photographers staking him out in Cubao, reached Malacañang at 8:46 a.m.—46 minutes late for work.

This just proves that “leaving early does not guarantee arriving on time,” said Julius Dalay, chair and founder of Commuters of the Philippines, referring to Panelo’s earlier remark that daily commuters should just learn to adjust their schedule to cope with the lack of public transport and the monstrous traffic jams.

Bayan secretary general Renato Reyes, the one who asked Panelo to take the “commute challenge,” congratulated the President’s aide “for arriving in one piece in Malacañang after nearly four hours ” on the road.

Panelo’s experience “only proved the extraordinary ordeal Filipinos go through every day,” noted Toix Cerna, spokesperson of the commuters’ advocacy group Komyut. “Four hours one way, eat that! That was really bad and I feel sorry for him as for all of us commuters.”

In September, Komyut released the results of a monthlong survey showing that most commuters in Metro Manila spend four hours every day—two hours each way—waiting for and chasing after public rides.

“It was wrong for Panelo to quip that because Filipinos are creative, they should just learn to adjust to beat the traffic and get to work on time. He must have forgotten that it is the government’s job to find solutions to problems like this, rather than tell us to suck it,” Cerna said.

Panelo conceded as much, saying that Filipinos cannot be creative forever. “But it doesn’t mean that we will just let things be. That’s why the government is looking for solutions to the problem. It cannot be permanent, it cannot be constant. We have to change this,” he said.

Panelo’s “commute challenge” was the top trending topic on Twitter as of Friday afternoon, with 37,500 tweets.

Among the highlights of his commute was a fellow passenger remarking that he “smells good,” to which Panelo quipped, “The President smells better.”

Despite surviving his ordeal, the official declined to say when or if he would ride the Light Rail Transit or Metro Rail Transit (LRT or MRT), other mass transport options notorious for frequent breakdowns. He’d like to avoid a spectacle, Panelo said.

On Sept. 1, 2014, then presidential spokesperson Edwin Lacierda and his deputy, Abigail Valte, took the MRT 3 and chronicled their almost hour-and-a-half trip to the LRT 1’s Central Station, which is near Malacañang.

In November 2017, then presidential spokesperson Harry Roque and some transport department officials had their turn, alighting at Central Station in Manila, where a car waited to shuttle them to the Palace. —WITH A REPORT FROM INQUIRER RESEARCH