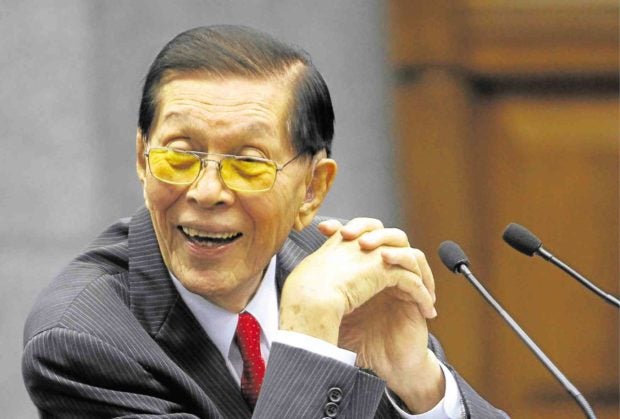 MANILA, Philippines — The Sandiganbayan Third Division has set for Oct. 16 the resumption of the plunder trial of former Senate President Juan Ponce Enrile in connection with the Priority Development Assistance Fund (PDAF) scam where he allegedly pocketed P172.8 million worth of kickbacks.

In a resolution, the antigraft court noted that the trial “has been dragging on for quite some time.”

“In order to avoid further delays, we order that the trial be set on Oct. 16, 2019, without prejudice to any motion [not made with intent to delay the proceedings] that the parties may submit for the court’s consideration,” the resolution said.

The resolution issued by the antigraft court also addressed the issues of both the Enrile camp and of the prosecution regarding evidence.

On Aug. 9, Enrile filed a manifestation before the court, complaining that the prosecution’s compliance with the court’s April 24 resolution regarding evidence was “inadequate” and “impossible to implement.”

The prosecution earlier stipulated that Enrile’s camp is allowed to copy the pieces of evidence still in the possession of the prosecution.

However, Enrile said that based on correspondence between his lawyers and the prosecution, it appeared that Enrile’s camp had to retrieve the evidence himself since the prosecution has already submitted the same to the Sandiganbayan Third Division’s clerk of court.

In its resolution, however, the antigraft court said the manifestation and countermanifestation of Enrile and the prosecution were clear and unambiguous and required no further action.

The court also underscored that Enrile could copy any written statement and document “by condition that the evidence is in the possession or under the control of the prosecution.”

Enrile faces plunder and graft charges for his alleged involvement in the PDAF scam, which saw him divert millions of his pork barrel to businesswoman Janet Lim- Napoles’ bogus nongovernmental organizations.

The Supreme Court allowed Enrile to post bail for his plunder charge out of humanitarian considerations in 2015.

Read Next
3 eyed to succeed Albayalde
EDITORS' PICK
822 NPA-free barangays set to get P20-M gov’t aid — Esperon
Don’t waste the hope of vaccines, warns WHO
Pope Francis to meet top cleric Sistani on second day in Iraq
Every Filipino home can now be a smart home with realme TechLife
Nestlé Philippines’ ‘NESCAFÉ Plan’ bags Grand Anvil at PRSP 56th Anvil Awards
Smart reinforces superiority with best speed and mobile video experience in PH
MOST READ
Jesuit lawyer, constitutionalist Fr. Joaquin Bernas dies at 88
How to lose a Filipino genius: Wesley So officially a US citizen
So: I lacked connections to succeed in PH ‘culture’
Robredo on Sara Duterte leading poll surveys: Why are Filipinos drawn to leadership of this kind?
Don't miss out on the latest news and information.