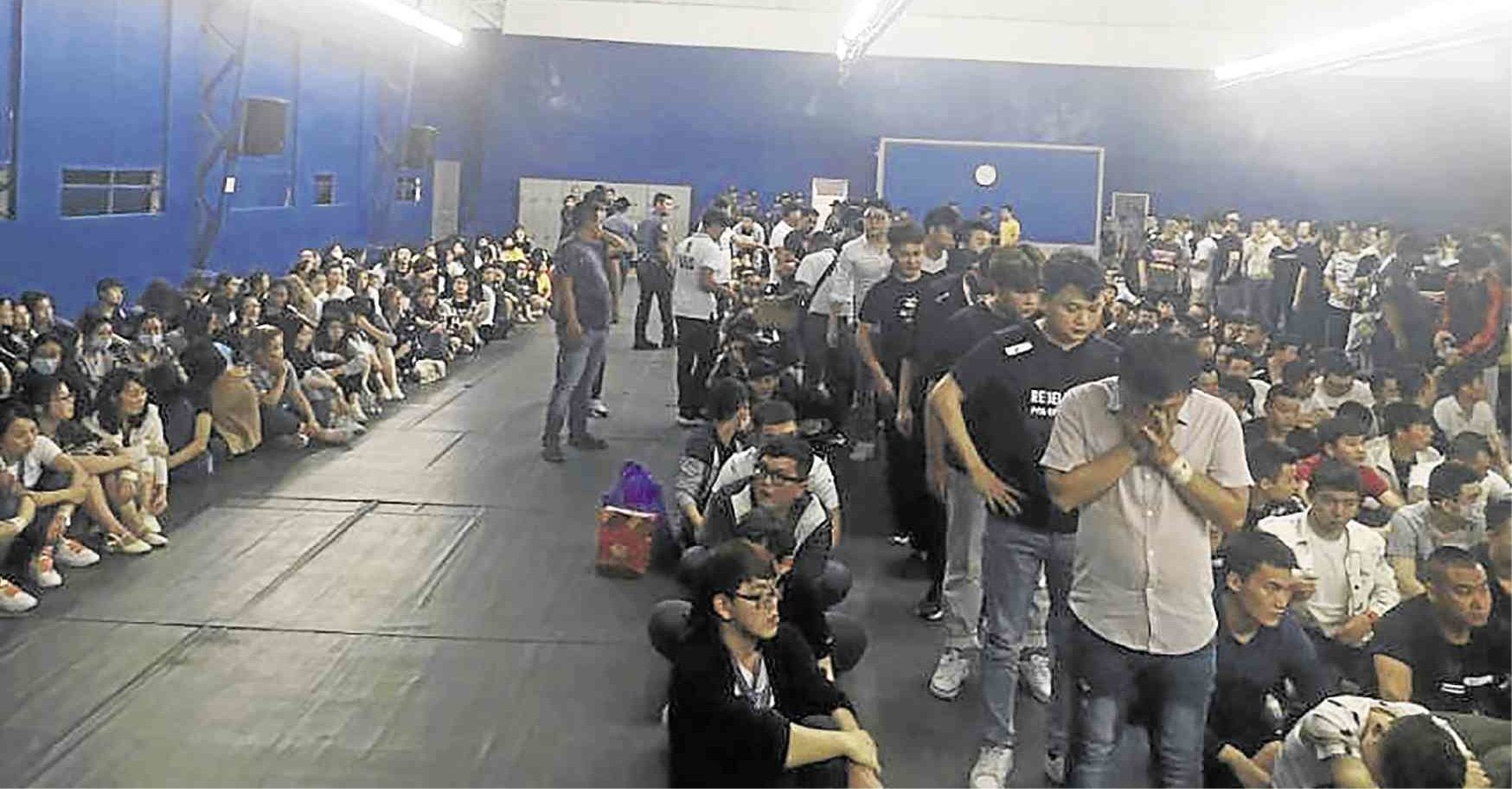 UNCERTAIN FUTURE Illegal workers from China, Burma, Malaysia, Vietnam, Taiwan and Indonesia face deportation after they were
arrested in a Wednesday night raid on their company in Parañaque City that had been linked to a telecommunication and
investment scam. —BUREAU OF IMMIGRATION VIAAP

Golden Unicom Technology Inc. apparently did not arouse any suspicion when it opened last month in Parañaque City as a business process outsourcing (BPO) center. Until China alerted the Philippines about the scam that was going on within the company’s walls.

On Wednesday night, 21 days after its opening, government agents raided the company’s premises on Naia Road, rounding up 542 illegally working foreigners, mostly Chinese and male, in one of the biggest mass arrests this year.

Some of the foreigners, who also included Burmese, Malaysians, Vietnamese and Indonesians, were caught still tinkering with their computers on five floors of the newly constructed 10-story Millennium Building.

The raid had been prompted by an information from a Chinese police attaché that the company was engaged in offshore telecommunications investment fraud in China, Police Maj. Gen. Guillermo Eleazar said.

The company, using a phishing scheme, posed as a legitimate organization to get sensitive information from their mostly Chinese customers, such as banking and credit card details, and account passwords. The customers were then lured to invest in fictitious businesses, he said.

“In the Philippines, it’s similar to the modus operandi of ‘budol-budol’ gangs, but with the use of communication technology,” said Eleazar, chief of the National Capital Region Police Office (NCRPO).

“The foreign nationals would initially show their victims  ‘proof’ that their money is gaining profit. Once the investors send in more money to increase their investment, their ‘accounts’ would be closed and all their investments gone. It’s like an investment scheme,” she said.

Similar recent mass arrests indicate criminal syndicates involved in fraud and illegal online gambling may be trying to move their operations to the Philippines, Sandoval said. Immigration authorities and other law enforcers, she said, “have been working triple hard on ridding the country of these illegal aliens.”

Wednesday’s arrests bring the number of arrested foreign workers to nearly 1,500, causing overcrowding at the BI’s detention center, which could accommodate only 140.

Last month, immigration authorities, backed by Army troops, arrested 324 Chinese accused of involvement in illegal online gambling and other crimes in a raid on eight hotels and other establishments in western Palawan province. Many of the Chinese lacked work permits and passports, officials said.

“They were arrested for working without permit and for being undocumented aliens,” said Immigration Commissioner Jaime Morente.

They face deportation if they violated immigration laws but would have to be detained longer in the Philippines if they’re convicted of crimes, he said.

Police were investigating if Filipinos were involved in the scam.

The city hall would recommend the closure of its office.

Eleazar said the growing involvement of Chinese in criminal activities, such as running clandestine sex dens in hotels and apartment buildings in Metro Manila, should be checked.

“We welcome the influx of Chinese nationals in the country, because their presence here helps in improving the economy. But we should also address the consequences that comes with it,” he said.

The city government of Parañaque, along with the police and Chinese Embassy, is studying plans to create a special committee to monitor the growing presence of Chinese businesses in the area.

Its business permits licensing office has shuttered more than 30 Chinese-owned establishments in the city for operating without permits and violating local ordinances.

Parañaque has seen a boom in Chinese businesses in the past three years, along with the influx of Chinese tourists in the city, which houses Entertainment City—a complex by Manila Bay in southern Metro Manila dotted with hotel-casinos and Pogos (Philippine offshore gaming operators).

According to the Department of Tourism, 1.2 million Chinese tourists visited the country last year—the second-largest market just behind the 1.5 million arrivals from South Korea. —WITH REPORTS FROM TINA G. SANTOS AND AP