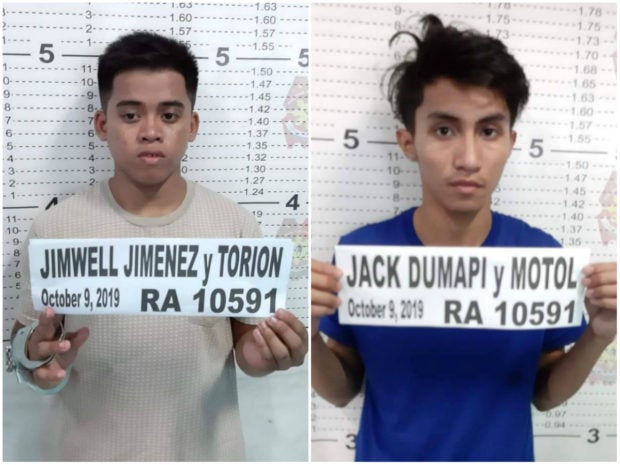 Mugshots of the suspects involved in the truck robbery incident in Tondo, Manila, in which its video became viral on social media. Source: Manila Public Information Office

MANILA, Philippines — Two more suspects behind the truck robbery incident that went viral on social media were arrested in Tondo, Manila on Thursday.

In a statement, the Manila Public Information Office said members of the Manila Police District (MPD) apprehended Jimwell Jimenez, 20, and Jack Dumapi, 18, in a follow-up operation conducted at Gate 2 of a parking area in Parola Compound.

The other suspect was arrested on Monday (October 7) by members of the Manila Police District Special Mayor’s Reaction Team (MPD-SMaRT) in Tondo, Manila.

In a Facebook video, suspects were caught stealing from passengers of a truck that was trapped in heavy traffic along Road 10.

Seized from Jimenez and Dumapi were 12-gauge shotgun with ammunition and a “pen gun.”

The suspects will face charges for illegal possession of firearms and for violation of Article 295 of Revised Penal Code.

The fourth suspect involved in the robbery known as Junjun Barola is still at large. /jpv

Read Next
Panelo vows to commute on his own, without media coverage
EDITORS' PICK
Water remains our saving grace right now
BREAKING: 3,226 latest COVID-19 cases bring PH’s total to 106,330
Smart 5G goes live
A gem of a residence in the new normal
PNP: Checkpoints back in MECQ areas
Been there, done that but what’s the difference between MECQ and GCQ?
MOST READ
Metro Manila, 4 other areas back on lockdown
MECQ guidelines in infographics
You’re my ‘idol’ in crafting laws, neophyte senator ‘Bato’ tells Drilon
Citing Duterte order, Lorenzana says PH won’t join other navies in South China Sea drills
Don't miss out on the latest news and information.