“Ayoko maki-pag-head on dun sa naghahamon dahil isa na po akong commuter [I do not want to face it head-on as I am already a commuter.]” Pialago said in a media forum on traffic at Kapihan sa Pantalan in Port Area, Manila when asked if she would accept the youth group’s challenge to take public transport.

Pialago cited that she goes to her office at the MMDA Building in Guadalupe, Makati by riding the Metro Rail Transit-3 (MRT-3).

[When I was working at MMDA, there are times that I use the MRT. The company car will escort me because of the early flag ceremony. If I will wait for the car I will ask them to bring me to the GMA Kamuning station and from there I will use MRT.] 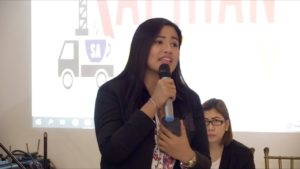 [Using the MRT, I will get off at Guadalupe, I will cross the overpass to reach the MMDA office.]

The youth group earlier challenged Pialago, Presidential Spokesman Salvador Panelo, President Rodrigo Duterte and Transportation Secretary Arthur Tugade to use public transportation in going to work every day for a week to experience what ordinary commuters experience in their daily commute.

On Wednesday, Panelo accepted the challenge and said he will be taking public transportation in going to Malacañang.

Pialago said she respects Anakabayan’s challenge but noted that the public should help government to address traffic woes.

“We respect Anakbayan’s challenge but we set aside the challenge. Let’s look for a solution all together,” she said.

Pialago stressed that while she uses public transportation, she sees no need to  share her experience by recording it on video .

Is there a traffic crisis?

Asked if there is a mass transport traffic crisis in Metro Manila, Samar 1st District Rep. Edgar Sarmiento affirmed that it could be considered as “crisis.”

He cited the plight of commuters going to their respective schools and workplace.

(For me, our countrymen are having problems waiting for public transportation. They would wake up at 3 a.m. in the morning and they would go home at 11 p.m.)

“Kung babasahin niyo na kung ano definition ng crisis, tingin ko ko crisis na ata ito (If you will read the definition of crisis, then I think this could be a crisis),” he added.

Pialago said MMDA is not ignoring this traffic problem. She also advised the public to stop “pointing fingers” and instead help in addressing the said crisis.

“If you think it is a crisis, we respect that, we feel the same pero sa amin hindi po kami bulag sa MMDA na may problema. May problema at kailangan solusyonan at magtulungan. [We are not blind. If there is a problem we need to solve it and work together.],” Pialago said.

“And let us stop pointing fingers and stop blaming people, blaming agencies and stop these challenges,” she added.

Panelo earlier was criticized after claiming that there is no transportation crisis, saying he only sees traffic problem.

“What do they mean by transportation crisis? I only see the traffic. That’s not transport. There’s transportation available. We can all get rides,” he said. /muf