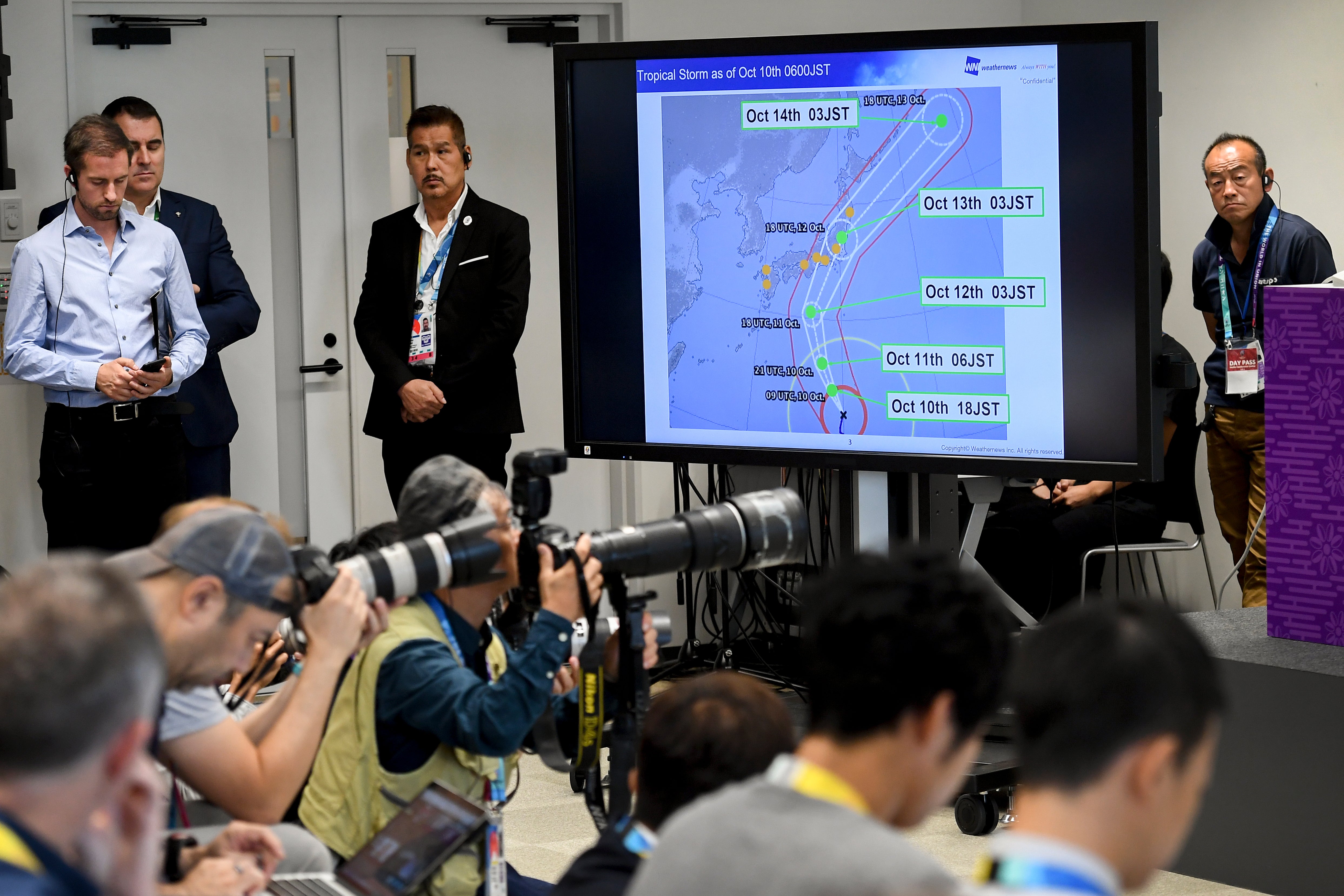 A screen displays the path of the approaching typhoon Hagibis, which will affect upcoming matches in the Japan 2019 Rugby World Cup, in Tokyo on October 10, 2019. – Rugby World Cup organisers took the unprecedented step of cancelling games — England v France, and New Zealand v Italy — on October 10 as Super Typhoon Hagibis bears down on Japan. (Photo by William WEST / AFP)

TOKYO — Just one month after the Greater Tokyo region endured the most violent storm in its history, an even stronger typhoon is forecast to batter the area on Saturday.

The storm is the most severe this year, coming after Typhoon Faxai wrought havoc on the world’s most-populated metropolitan area, killing three, injuring at least 60 others, grounding flights and causing major transport snarls.

Yesterday’s forecast showed the Tokyo metropolitan area to be directly in the new storm’s path. JMA said the typhoon is expected to bring strong winds, heavy rain and choppy waves to wide areas across Japan – from Okinawa in the south-west to Hokkaido in the north-east.

The weatherman has given Typhoon Hagibis its highest typhoon classification of “violent” while the United States’ Joint Typhoon Warning Centre called it a “super typhoon”, akin to a Category 5 hurricane. Typhoon Hagibis is likely to marginally weaken but will still pack winds above 179kmh on its approach to the Japanese archipelago this weekend.

The organizing committee of the Rugby World Cup yesterday said it was considering counter-measures for this weekend’s seven matches – including crunch ties between England and France on Saturday and between host Japan and Scotland on Sunday.

This may involve a change in the competition venue or a reschedule of the matches, which will be the last round of ties in the pool stage, the committee said.

Rugby World Cup tournament rules state that if a match in the pool stage cannot be held on a scheduled day, it will be deemed a draw with points allocated to both teams. But the organizing committee said it sees cancellation only as a last resort, as doing so could have a bearing on the final league rankings and quarter-final match-ups.

Railway companies, including the East Japan Railway Company, have said a cancellation of train services may be on the cards, depending on the trajectory of the typhoon.

Already, Japan’s Maritime Self-Defense Force has said it will cancel a public vessel observation event to be held at Sagami Bay, off Kanagawa prefecture, south of Tokyo, this weekend.

JMA chief forecaster Ryuta Kurora said yesterday the typhoon may end up steering east towards the Pacific Ocean without making landfall. But even so, he called for added precautions as the large size of the typhoon means wide areas will still face strong winds.

He also called on the authorities in the Greater Tokyo region – which includes Tokyo and neighbouring prefectures such as Chiba, Kanagawa and Saitama – to be on high alert for violent storms over the 24-hour period from 6am on Saturday to 6am on Sunday.

Typhoon Hagibis comes as Chiba prefecture, directly to the east of Tokyo, is still recovering from the impact of Typhoon Faxai, which damaged 34,275 buildings and caused 41.2 billion yen (S$530 million) in damage to its agricultural industry.

Typhoon Faxai also knocked out power to as many as 930,000 homes at one point, and as of Sunday, 72 homes were still without power.

The Singapore Embassy in Tokyo, in a circular yesterday afternoon, said of Typhoon Hagibis: “Strong winds, heavy rain and high waves are expected. If you are going to be in the affected areas this weekend, you are advised to stay indoors and stay away from windows.”