For 1st time, Biden declares Trump must be impeached

ROCHESTER, N.H.  – Democratic presidential candidate Joe Biden said Wednesday for the first time that President Donald Trump must be impeached for abusing the powers of his office to help his own reelection. 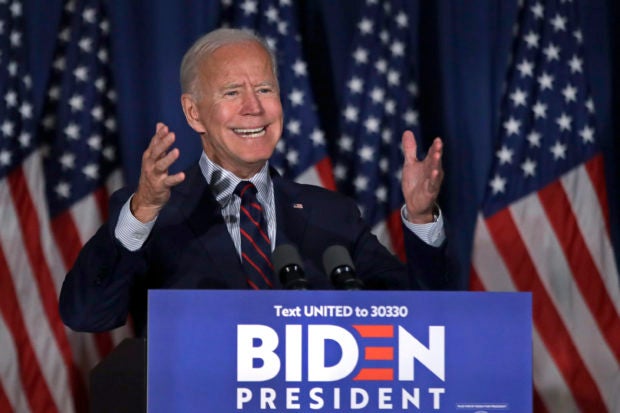 Biden made the remarks as part of a blistering 25-minute speech in New Hampshire, departing from his usual campaign pitch and signaling that he will aggressively confront Trump as the president faces an impeachment inquiry rooted in his unfounded accusations that the former vice president and his son had nefarious dealings in Ukraine.

Trump is “shooting holes in the Constitution,” Biden said, by asking foreign powers to find dirt on the Bidens and then refusing to cooperate with the resulting House impeachment inquiry.

“This is a president who has decided this nation doesn’t have the tools, the power, the political will” to punish bad behavior, Biden said, cataloguing a litany of Trump’s actions that the former vice president said warrant impeachment.

The speech comes after two weeks of uneven responses from Biden as he and his advisers debated internally the best way to handle Trump’s broadsides. Biden had alternated between muted dismissals at a series of fundraisers and more aggressive public displays, urging reporters to “ask the right questions,” promising he’d beat Trump “like a drum” and using a campaign rally in Reno, Nevada, to hammer the president. His New Hampshire speech, though, was his most thorough, visible retort to date, with his impeachment call timed at midday to ensure that it carries the news cycle.

Before Biden had concluded in New Hampshire, Trump retorted via Twitter. “So pathetic,” he wrote, to see Biden calling for his impeachment. The president maintained that he had done nothing wrong.

In a July 25 phone call to Ukraine’s president, Trump asked for “a favor” of investigating Biden and his son Hunter, who previously served on the board of a Ukrainian energy firm that had drawn scrutiny in that country. A rough White House transcript of that call and a related whistleblower complaint prompted House Democrats to begin impeachment proceedings.

Without evidence, Trump insists Biden used his role as vice president to protect his son from corruption investigations when Biden pressed for the firing of the top Ukrainian prosecutor, Viktor Shokin, during President Barack Obama’s second term. Ukrainian officials, including one Shokin successor, have disputed Trump’s theories; the Obama administration’s position was supported by many other Western governments that saw Shokin as incompetent or corrupt.

Since the disclosure of Trump’s Ukrainian telephone call, the president has publicly suggested China should investigate Hunter Biden’s business dealings there, comments that Biden noted came with Trump “standing in front of reporters and cameras like I am at this moment.”

Biden on Wednesday again blasted Trump’s “lies and smears and distortions,” saying the president peddles them because he fears facing Biden in a general election.

“He’s trying to create a campaign where truth and facts are irrelevant,” Biden said, adding that the spectacle covers the president’s “manifest incompetence.”

Trump advisers believe impeachment could help him politically, energizing his base and leaving some independents disenchanted with Democrats. The administration, however, has made clear it will not cooperate with Democrats on Capitol Hill and has been resisting requests for documents and testimony from administration officials — all while keeping up the verbal assault on Biden.

Yet even with Biden’s more assertive posture, questions remain about how Trump’s tactics and the impeachment proceedings affect the Democratic primary.

Some Biden aides see the episode as underscoring his fundamental arguments about Trump, a point Biden himself nodded toward in New Hampshire. “When I announced my candidacy,” he recalled, “I said I was running in order to restore the soul of America. That wasn’t hyperbole.”

At the same time, Biden advisers remember with caution the 2016 campaign, when Trump dominated media narratives of the Republican primary and the general election against Democrat Hillary Clinton with a barrage of attacks that forced opponents to campaign on his terms. And they know the impeachment inquiry could last months — and potentially never result in the Republican-led Senate removing Trump from office even if the Democratic-led House impeaches him.

In his speech, Biden noticeably did not mention the Senate or its potential role in deciding Trump’s fate. But he did pledge not to campaign exclusively on Trump’s turf.

“None of these attacks are true, and I’m going to stay focused on your lives. That’s what this election is about,” he said, adding that the country “can’t wait” for action on health care, education, gun regulations and the climate crisis. “The world can’t wait for America once again to lead a stable, peaceful international order.”

Biden got an enthusiastic reception, including from some New Hampshire voters who hadn’t considered him their top choice in the nation’s first presidential primary state.

“He spoke with conviction. He answered some of Trump’s charges, and he got some good shots in at Trump,” said Bill Hurley, a 71-year-old Democrat who named Biden his second choice behind Minnesota Sen. Amy Klobuchar. /gsg