RIO DE JANEIRO  – The oil that has been polluting Brazil’s northeastern beaches since early September is likely coming from Venezuela, according to a report by Brazil’s state oil company cited by the country’s environment minister. 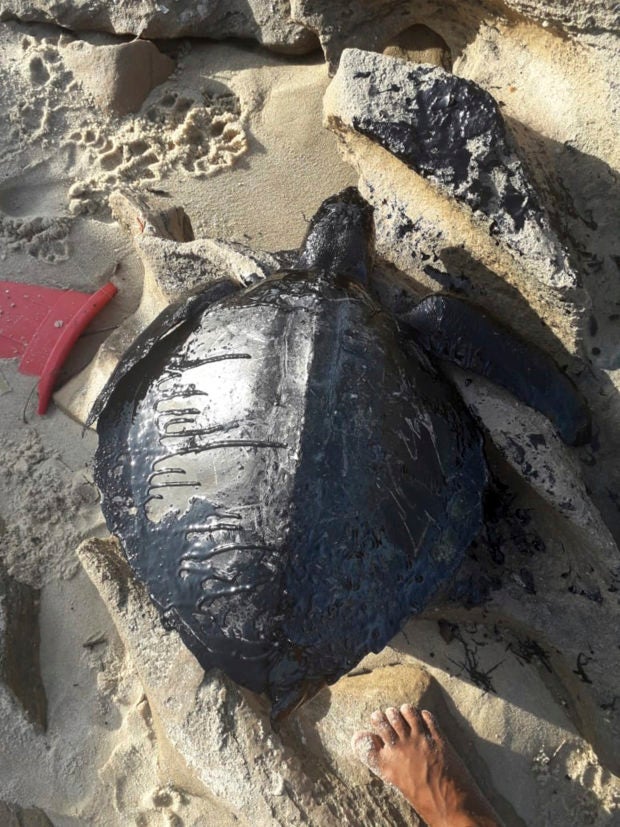 This Sept. 1, 2019 handout photo released by Instituto Verdeluz, shows the carcass of a turtle covered in oil on Sabiaguaba beach, in Fortaleza, Ceara state, Brazil. Brazil’s main environmental agency said Thursday it has detected 105 crude oil spills from an undetermined source polluting the waters of the country’s northeast coast this month. “So far there is no evidence of contamination of fish and crustaceans,” the institute said, though it said the spills had killed seven sea turtles. (Instituto Verdeluz via Instituto Verdeluz)

The oil sludge has now reached 61 municipalities in nine Brazilian states, contaminating over 130 beaches — a disaster that Brazilian officials called “unheard of.”

Salles said the oil was transported on a foreign boat navigating close to the Brazilian coast, but he stressed that the cause of the spill remained unknown.

As of late Monday, authorities had retrieved over 130 tons of sludge, which has killed at least 10 turtles.

Brazil’s environmental protection agency said that could just be small fraction of the oil spilled, noting there are some 2,000 kilometers (about 1,242 miles) of coastal line to monitor.

Environmental experts fear that the oil has come into contact with many more marine animals and that it will damage coral and marine life. Studies are underway.

“In such cases of emergency, it is fundamental to identify the source, and then try and mitigate contamination,” said Marcelo Amorim, who is part of the environmental agency’s emergency coordination unit.

Speaking from the state of Sergipe, one of the hardest hit, Amorim said there was no way to know how much more oil could make its way to Brazil’s shores.

Sergipe authorities declared a state of emergency and recommended that swimmers as well as fishermen stay away from polluted beaches.

Officials say the oil has been particularly hard to track as it floats under the surface of the water and can’t be easily detected from planes. Clouds in the area have also limited the use of satellites images, Amorim said.

Brazil’s navy is in charge of the investigation into the origin of the oil spills, while the federal police force is looking into possible criminal charges.

Petrobras has been helping authorities in their investigations, examining oil samples and cleaning up beaches. /gsg