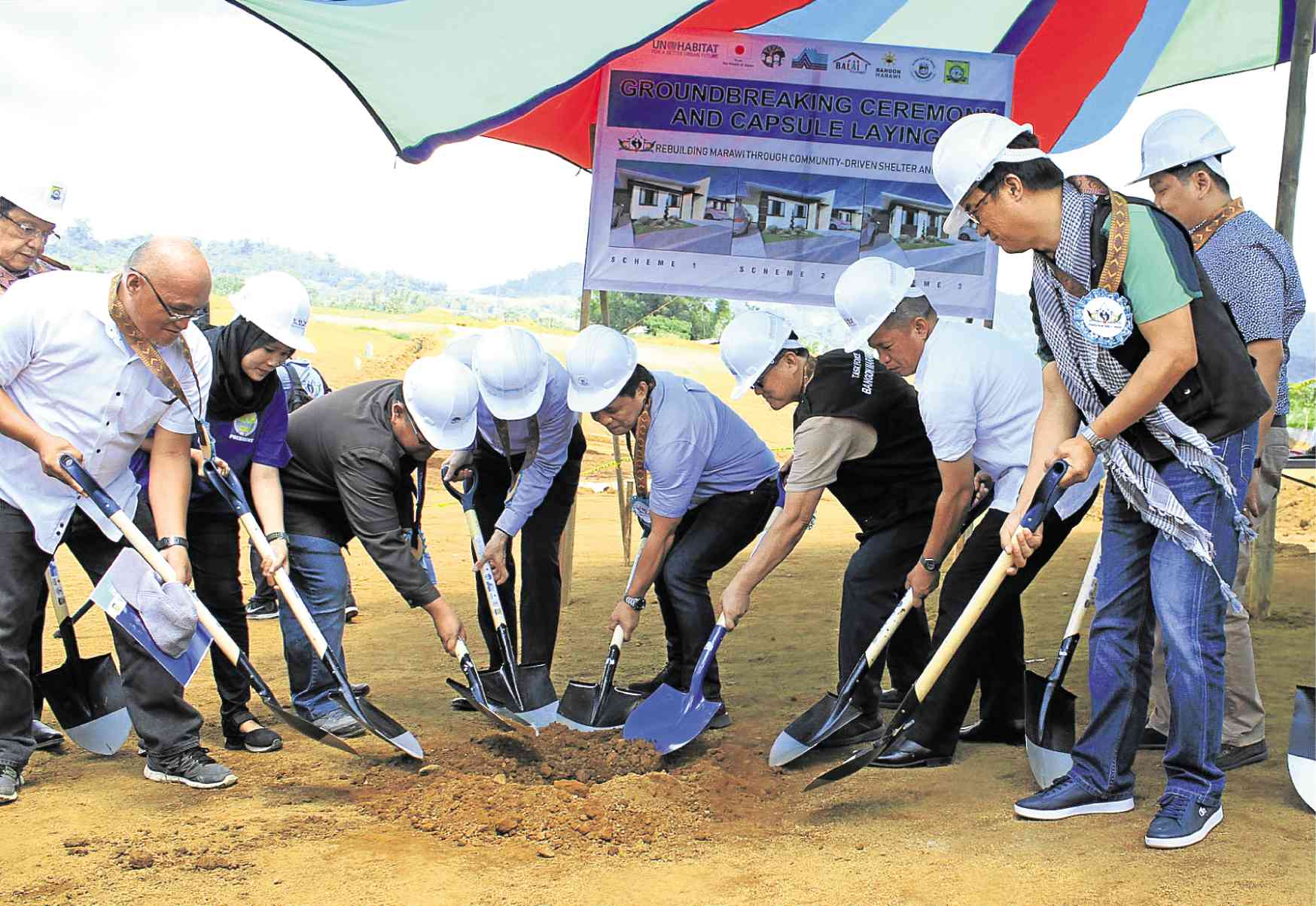 HOUSING PROJECT Officials of the UN Habitat, the National Housing Authority and Task Force Bangon Marawi join the groundbreaking ceremony for a housing project for residents displaced by the 2017 Marawi siege. —RICHEL UMEL

MARAWI CITY, Lanao del Sur, Philippines — The United Nations Human Settlements Programme (UN-Habitat) is building 1,500 permanent shelters for residents of this city who were displaced by the five-month war against Islamic State-linked militants in 2017.

Officials of the UN agency, along with representatives from the Japanese government, the Task Force Bangon Marawi (TFBM) and the National Housing Authority (NHA), gathered here on Monday for groundbreaking rites for the initial 500 houses set for construction.

The Japanese government has committed to fund the construction of 1,500 shelters, worth P500 million, through the UN Habitat project called “Rebuilding Marawi Through Community-Driven Shelter and Livelihood.”

Warren Ubongen, UN Habitat project manager, said the partnership with the Japanese government for Marawi rebuilding was forged by President Rodrigo Duterte and Japanese Prime Minister Shinzo Abe on the sidelines of the Asean Summit in Singapore in November last year.

The 500 houses would be built on a 2-hectare land in Barangay Kilala, in the outskirts of Marawi’s urban center, and just near the village hosting transitional shelters. The site is part of a 39-ha property acquired by the NHA to host permanent shelters for residents who fled Marawi at the height of the siege.

The initial batch of 500 houses is set for completion in November. The remaining 1,000 houses would be built in the outskirts of the city.

Roderick Ibañez, the NHA’s Marawi project management head, said they expected to complete building all 1,500 shelters by March next year.

The shelters and home lots will be given free to beneficiaries. Each single detached, one-story shelter is made of concrete and will be built on a 90-square-meter lot. It has a floor area of 46 sqm and equipped with a toilet and a kitchen, and comes with electricity and water connections.

“In a few months, we will see a new community breathe with life,” Barth added.

These will be distributed to families who can no longer rebuild their homes along the Agus River and on the shores of Lake Lanao. These areas have been declared no-build zones.

At least 10 of 24 villages in Marawi’s “most affected area,” or where the intense fighting between terror groups and the government happened, are situated along the river and on the lake shore.  At least 1,900 families were living in these communities before the siege, local officials said.

The UN housing project also hopes to generate jobs among the displaced residents who will be employed in the project through a cash-for-work scheme.

“At the heart of this project is our partner communities who actively engage with other communities and stakeholders in the rehabilitation work,” Barth said.

“We believe that people have the inherent capabilities to cope with extreme difficulties once their potential are harnessed. The project is designed that way to support the rebuilding of their lives and their physical assets,” he added.

Housing Secretary Eduardo del Rosario said shelters for another group of 400 families would be built by San Miguel Foundation.

The site for permanent shelters will have a public market, plaza, mosque and a school building, according to Del Rosario, also chair of the TFBM.