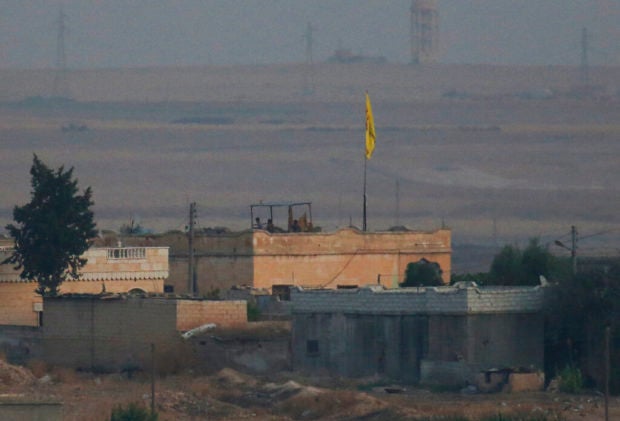 In this photo taken from the Turkish side of the border between Turkey and Syria, in Akcakale, Sanliurfa province, southeastern Turkey, members of the Kurdish People’s Protection Units, or YPG, hold a position on a building in the Syrian town of Tel Abyad, Tuesday, Oct. 8, 2019. The Turkey – Syria border has became a hot spot as Turkish Vice President Fuat Oktay said Turkey was intent on combatting the threat of Syrian Kurdish fighters across its border in Syria. (AP Photo/Lefteris Pitarakis)

BEIRUT — A U.S.-backed force and two Syrian activist groups said Islamic State militants have carried out an attack in the city of Raqqa in northern Syria.

The early Wednesday attack targeted a post of the U.S.-backed Kurdish-led Syrian Democratic Forces in Raqqa, which was once the extremists’ de facto capital.

The attack comes as Turkey is expected to launch an offensive against the Kurdish fighters in northeastern Syria.

The Kurdish fighters say IS launched three suicide attacks against its positions in Raqqa. There was no word on casualties.

Raqqa is being Silently Slaughtered, an activist collective, reported an exchange of fire and a blast.

The Britain-based Syrian Observatory for Human Rights, a war monitoring group, says the attack involved two IS fighters who engaged in a shootout before blowing themselves up. /jpv