Church accused of covering up priest’s abuse, and paternity 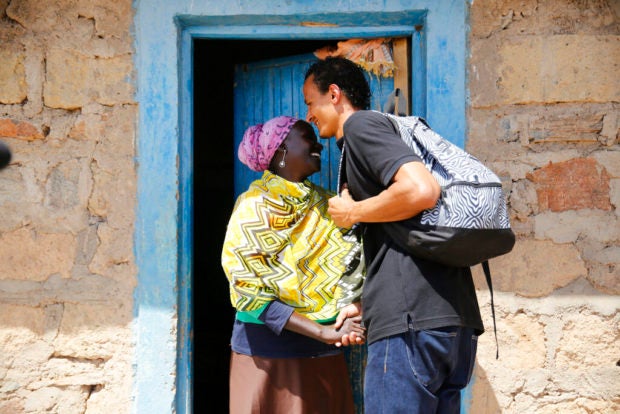 Gerald Erebon is welcomed by his aunt, Scolastica Apayo, at her home in the Isiolo area of the Archers Post settlement in Kenya on Sunday, June 30, 2019. Scolastica said her sister, Sabina Losirkale, finally told her the secret in 2012, two weeks before she died. “Now that my days are over,” her sister told her, she could reveal all: “When Gerald will ask you who’s his father, just tell him: Father Mario.” (AP Photo/Brian Inganga)

SAMBURU, Kenya — When Sabina Losirkale went into labor, her sister Scolastica recalls, priests and religious sisters filled the delivery ward waiting to see the color of the baby’s skin — and if their worst fears had come to pass.

Scolastica and dozens of villagers peered in from behind the clinic fence, as well.

“How will we cover up this shame?” the sisters fretted, she recalled.

The shame that brought this baby into the world: An Italian missionary priest, her family alleges, impregnated this Kenyan girl when she was just 16. But the nuns need not have worried about the scandal spreading.

The priest — who to this day denies paternity — was transferred, and a Kenyan man was found for Sabina to marry. He would be listed as the father on the boy’s birth certificate.

The church’s efforts to conceal what is alleged to have happened here would stretch over three decades — a testament to the extraordinary ways in which church officials have dealt with accusations that priests in the developing world have had sex with girls and young women. Here, the Catholic Church’s sexual abuse crisis is just beginning to force a reckoning.

The boy who was born to Sabina Losirkale on that day in 1989 has been an outcast of sorts for all of his life. Tall and light-skinned, with wavy hair, Gerald Erebon, now 30, looks nothing like the dark-skinned Kenyan man who he was told was his father, or like his black mother and siblings.

“According to my birth certificate, it is like I am living a wrong life, a lie,” he said. “I just want to have my identity, my history.”

Amid the torrent of sex abuse accusations that have rocked the priesthood, little attention has been paid to the pregnancies resulting from those illicit acts. And nowhere is this a more glaring issue than in Africa.

While there are no official statistics, experts point to a “culture of silence and compromise” that has allowed abuses of all kinds to fester in African society, said Augusta Muthigani, in charge of education for the Kenyan bishops’ conference.

“Matters of sexuality are not discussed openly,” she said.

The continent has long lagged behind the United States, Europe and Australia in confronting the problem of priests having sex with children, given the church’s priorities here have focused on fighting poverty, conflict and traffickers who sell children off to war or work.

Those initiatives, though, are relatively new, scattershot and underfunded. And eight months after Pope Francis summoned bishops from around the world for a summit to insist that clergy sexual abuse prevention be a priority for the universal church going forward, African bishops made no mention of it in their final declaration after a continent-wide assembly in July. All in a region where advocates say Catholic clergy routinely violate their vows of celibacy, including with children.

The Rev. Mario Lacchin encountered Sabina Losirkale when she was a student at the Gir Gir Primary School in Archer’s Post, a dusty town on the highway to Ethiopia. The school was established by the Consolata Missionaries religious order, which had come to Archer’s Post to spread the faith to the semi-nomadic tribes of Kenya’s northern Rift Valley.

Growing up in the 1970s and ’80s, the Losirkale girls and two cousins were often left on their own; their parents were poor shepherds and spent days away from home, seeking pasture in the bush for their animals.

Starting about a year before she turned 16, Sabina skipped afterschool sports to go to the priests’ quarters to do housework, cooking and cleaning for the parish priests. Scolastica recalls she would sometimes see Sabina and Lacchin hugging as they said goodbye.

Other times, Scolastica said, Sabina would come home from Lacchin’s house crying and asking for Scolastica to fetch water so she could bathe. Some nights she didn’t come home at all.

At the time, the priest was in his early 50s.

“I think Father Mario was taking advantage of my sister,” said the 45-year-old widow, looking through family photos in her one-bedroom, mud-brick home. “He bribed her with gifts, food, clothes. He was even buying us books. My sister used to come with books, pens, all we needed.”

One night, Sabina vomited. It was the first indication that she was pregnant.

Their parents were shocked and angry. They demanded to know who the father was.

Lacchin was quietly transferred to a nearby mission; his driver and a catechist at Archer’s Post, Benjamin Ekwam, was chosen to marry Sabina.

“You know, it was very shameful in the community,” Scolastica said. “If someone wanted a child, a girl, they just married. So this was just an embarrassment to the whole community.”