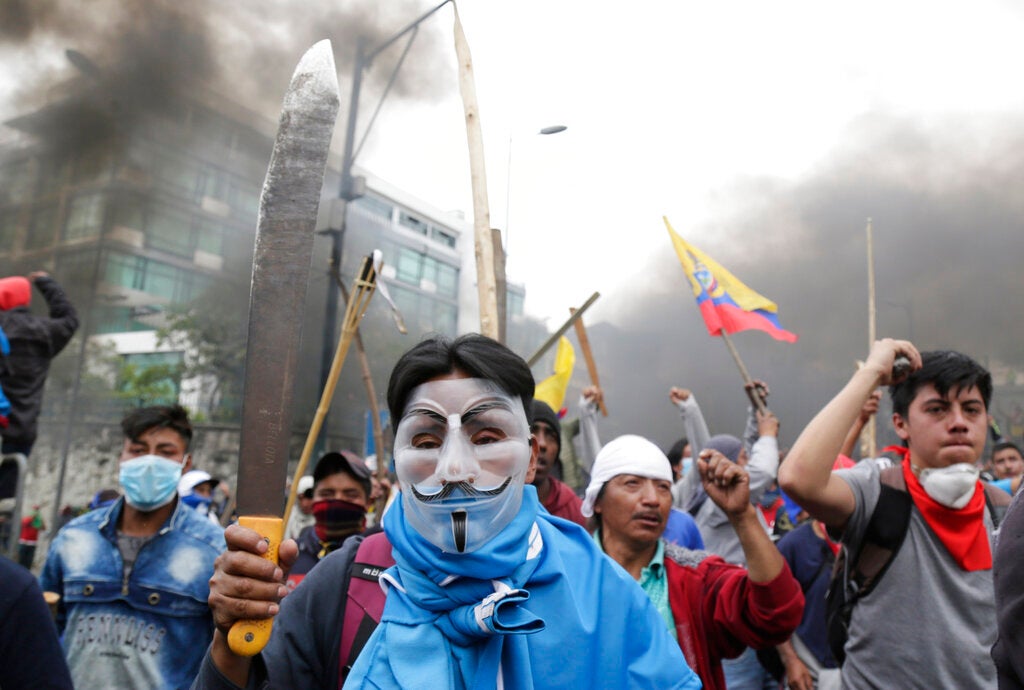 QUITO, Ecuador — Thousands of indigenous people, some carrying long sticks, converged on Ecuador’s capital Tuesday as anti-government protests and clashes led the president to move his besieged administration out of Quito.

The South American country of 17 million people appeared to be at a dangerous impasse, paralyzed by a lack of public transport and blockaded roads that were taking a toll on an already vulnerable economy.

Violence has persisted since last week, when President Lenín Moreno’s decision to end subsidies led to a sharp increase in fuel prices. Protesters seized some oil installations and the state oil company, Petroecuador, warned that production losses could reach 165,000 barrels a day, or nearly one-third of total production, if insecurity continues.

On Tuesday, protesters broke through police barriers and some entered the empty congress building in Quito. Police firing tear gas forced them to retreat.

Indigenous protesters occupied two water treatment plants in the city of Ambato, south of the capital, raising concern about supply to residents, according to municipal authorities.

On Monday night, hundreds of people rampaged through the Duran area near the port city of Guayaquil, looting pharmacies, electronic appliance stores and other buildings.

In another part of Ecuador, police abandoned an armored vehicle to protesters who set it on fire. In multiple areas, rioters smashed car windows, broke into shops and confronted security forces.

Some video footage has shown police beating protesters on the ground. Opponents have accused Moreno’s government of human rights abuses in its attempts to quell disturbances.

Moreno met with Cabinet ministers in Guayaquil on Tuesday after moving government operations there from Quito because of security problems. In comments broadcast by the Ecuavisa television network, he said he had the support of Ecuador’s institutions and thanked them “for their defense of the democratic system.”

In a televised address late Monday, the president said he was the target of a coup attempt, but would not back down from his decision to cut subsidies contributing to huge public debt that soared before he took office. The cuts were among measures announced as part of a $4.2 billion funding plan with the International Monetary Fund, which said the package will help the poor by strengthening Ecuador’s economy and generating jobs.

Indigenous groups have condemned what they call the government’s “closed-door agreement” with the IMF, saying in a statement that austerity measures would deepen economic inequality.

The groups said they were carrying out “civil disobedience” and had detained some soldiers and police encroaching on indigenous territories. But they criticized vandalism and looting “by external actors who are not affiliated with our movement or goals.”

Moreno called for dialogue to resolve the crisis. At the same time, he said his leftist predecessor and former ally, Rafael Correa, is trying to destabilize Ecuador with the help of Venezuelan President Nicolás Maduro. Ecuador is among dozens of nations calling for Maduro’s ouster.

Maduro dismissed the claim in a Tuesday evening television appearance. He jokingly called himself “Super Maduro” and wiggled his dark mustache in a mocking suggestion that he can summon superpowers to topple governments.

Correa and Moreno have traded allegations of corruption in recent months, and Correa says he and his allies are victims of political persecution. Correa, who has been living in Belgium, faces an arrest warrant issued last year in Ecuador for alleged corruption.

The Organization of American States called for talks to end the unrest in Ecuador and said Moreno was constitutionally elected.

“The kidnapping of police and military personnel is totally unacceptable, as is the destruction and looting of public goods, the burning of patrol cars and attacks on ambulances,” the regional bloc’s general secretariat said.

Some 570 people have been arrested in Ecuador for crimes including attacks on people and property, according to Juan Sebastián Roldán, the president’s private secretary.

“What we’re going through is not a peaceful mobilization, it’s delinquency and vandalism,” Roldán said on Twitter.

The government last week declared a state of emergency, allowing it to curb some civil liberties as it tries to restore order.

The disturbances have spread from transport workers to students and then to indigenous demonstrators, an ominous turn for the government. Indigenous protesters played a major role in the 2005 resignation of Ecuador’s president at the time, Lucio Gutiérrez, though the military’s tacit approval was key to his removal.

The country’s biggest indigenous group, the Confederation of Indigenous Nationalities of Ecuador, said Moreno’s government had failed to alleviate the welfare of Ecuador’s “most vulnerable” people. The group made similar complaints about Correa, his predecessor.

“We have shown throughout Ecuador’s history that indigenous peoples have the power to shut down the country when our rights are put at risk and power is abused,” the indigenous groups said in their statement.