WASHINGTON – In a span of 24 hours, President Donald Trump moved from threatening to obliterate Turkey’s economy if it invades Syria to inviting its president to visit the White House. 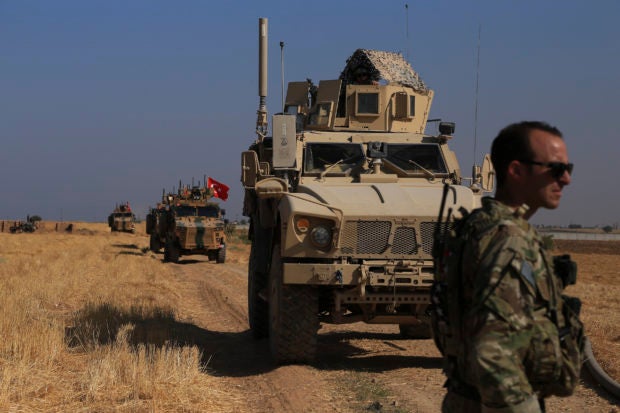 FILE – This Friday, Oct. 4, 2019 file photo, Turkish and American armored vehicles patrol as they conduct joint ground patrol in the so-called “safe zone” on the Syrian side of the border with Turkey, near the town of Tal Abyad, northeastern Syria. President Donald Trump’s announcement that U.S. troops in Syria would step aside to make way for a Turkish military operation against U.S.-allied Syrian Kurdish fighters unleashed a torrent of near unanimous criticism and warnings of immediate and long-term negative consequences. (AP Photo/Baderkhan Ahmad, File)

But Trump did not back away Tuesday from a plan to withdraw American troops from Syria as he tried to persuade Turkey not to invade the country and attack the U.S.-allied Kurds — a needle-threading strategy that has angered Republican and Democratic lawmakers and confused U.S. allies.

Trump tweeted that while U.S. forces “may be” leaving Syria, the U.S. has not abandoned the Kurds, who stand to be destroyed if Turkey follows through with its planned invasion.

The Kurds lead a group of Syria fighters who have been steadfast and effective American allies in combating the Islamic State in Syria. Turkey, however, sees the Kurds as terrorists and a border threat.

Joseph Votel, a retired Army general who headed Central Command’s military operations in Syria until last spring, wrote on The Atlantic website Tuesday that mutual trust was a key ingredient in the U.S. partnership with the Kurds.

“The sudden policy change this week breaks that trust at the most crucial juncture and leaves our partners with very limited options,” Votel wrote.

Jonathan Schanzer, a Syria scholar at the Foundation for the Defense of Democracies, said even a limited Turkish incursion into northern Syria could quickly escalate.

“The president is doubling down on this — seems to be reversing course,” Schanzer said. “He’s trying to convey to the American people that he’s made the right decision. Of course, (Turkish President Recep Tayyip) Erdogan is going to see this as a green light.”

The confusion began Sunday when the White House issued a late-night statement saying U.S. forces in northeastern Syria would step aside for what it called an imminent Turkish invasion. The statement made no mention of U.S. efforts to forestall the invasion, leading many to conclude that Trump was, in effect, turning a blind eye to a slaughter of Kurds.

On Monday, amid criticism from some of his staunchest Republican supporters, including Senate Majority Leader Mitch McConnell, Trump suggested he was washing his hands of the Syria conflict, saying in a tweet that “it is time now for others in the region … to protect their own territory.” But he also threatened to “totally destroy and obliterate the Economy of Turkey” if its military action in Syria went too far.

Administration officials argue that Trump is employing strategy in response to Erdogan’s insistence during a phone call Sunday with Trump that he was moving ahead with a military incursion into Syria. Erdogan seemed to have rejected a joint U.S.-Turkish plan, already being carried out, to create a buffer zone on the Syrian side of the border to address Turkey’s security concerns. The execution of that plan included dismantling some Kurdish defensive positions on the Syrian side of the border. /gsg