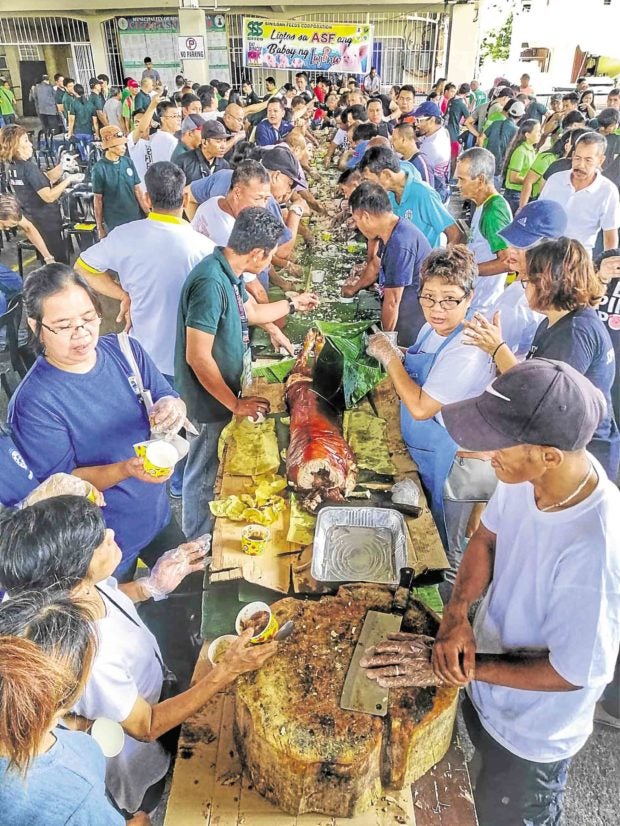 SHARED MEAL Siniloan residents share a meal of “lechon” to show that local pork is safe for consumption. -PHOTO CONTRIBUTED BY GREGGY SALIBA

Saliba said concerns among consumers were particularly high in Siniloan, the town being on Laguna’s boundary with Rizal province, where the first cases of swine fever were recorded in August.

The boodle fight was joined by around 200 government employees at Siniloan’s town plaza.

According to Saliba, Siniloan has only 10 backyard hog farms although it hosts an animal feed factory that supplies the needs of other towns.

He said that since the swine fever outbreak in Rizal, pork sales in the public market had slowed down.

In the capital town of Sta. Cruz, market vendors who normally sold three to four pigs a day could now sell only one.

The government said the swine fever virus could not be transferred from hogs to humans or any other animal.

Arnel de Mesa, Department of Agriculture director in Calabarzon (Cavite, Laguna, Batangas, Rizal, Quezon), said protocols were in place to prevent the spread of swine fever to other parts of the region. —Maricar Cinco