MANILA, Philippines — Pasig City Mayor Vico Sotto on Tuesday said he will go after erring officials of the City Environment and Natural Resources Office (CENRO) following the closure of a meat processing plant for untreated sewage.

Sotto called the attention of CENRO during his State of the City Address (SOCA), saying that the meat processing plant’s supervisor disclosed that they were still issued permits despite previous warnings from the city’s environment office.

The Pasig City mayor said not only does the waste from the plant cause pollution; it could also block the city’s drainage system that could result in flooding and affect residents. 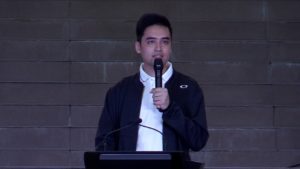 (Start thinking. I have given you 100 days to cleanse your ranks. If you will not work properly, I will go after you. I will not just go after you, I will get you jailed. Enough.)

Sotto said he already asked the city administrator to look into the case, particularly on the city environment office’s personnel who were in charge of the inspections in the area.

However, Sotto explained that there may be other reasons that the government personnel failed to order the closure of erring business establishments in the city earlier – which includes the fear that businessmen may go after them.

(That is why I joined in the inspection this morning to give courage to our government workers who want to do what is right.)

(Some are afraid, ‘These businessmen are rich, they might go after me if I have their business closed. My family might be affected.’ These are the realities of governance where our employees, somehow they get nervous.)

But if the erring government workers were proven to have failed to do their mandate due to corruption, Sotto said he will go after them.

(We have to discern, why did their inspections end up like that? Is it because of their fear or due to corruption? If the worker is corrupt, we will not stop. We will go after those who are corrupt. I know there are still a lot out there, we will go after them one by one. We cannot tolerate that.)

Sotto delivered his SOCA at the Plaza Bonifacio in his 100th day in office.

Sotto also discussed in his SOCA the progress the city government had accomplished in various sectors such as health, education, and public service, among others.

Among those present during the event were his mother, actress Coney Reyes, and Congressman Roman Romulo.

Sotto is the youngest mayor among the incumbent local chief executives in Metro Manila. /kga