PARIS – French lawmakers are grappling with one of the country’s thorniest issues.

On Monday, they began debating immigration, at a time when tent cities have expanded in urban areas across the country and asylum demands are spiking. 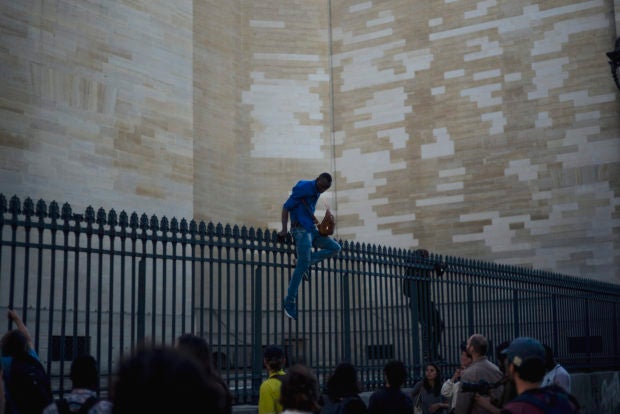 FILE – In this July 12, 2019 file photo, a migrants climbs over the fence of the Pantheon monument, in the Latin quarter of Paris. France’s National Assembly is poised to take up perhaps the most contentious issue in France: immigration. The body will debate immigration reform Monday Oct. 7, 2019 afternoon as part of French President Emmanuel Macron’s pledge to confront the issue head on during the second half of his presidency. (AP Photo/Kamil Zihnioglu, File)

With municipal elections months away, President Emmanuel Macron has pledged to confront immigration head-on during the second half of his term.

A new immigration law was passed in 2018, but Macron made clear last month that he intends to further toughen his stance, describing immigration as a “working class” problem and appealing to lawmakers not to cede the issue to the far right.

Quotas — a nearly taboo word in some political quarters — aren’t off the table, Prime Minister Edouard Philippe said in a speech opening the debate.

“I’m not afraid of reflecting on the idea of quotas,” he told lawmakers, adding that he does not envisage quotas for asylum seekers but left unclear where quotas might be instituted.

Asylum requests have fallen across Europe since the 2015 migration crisis. But in France, they’ve continued to climb, reaching more than 123,000 in 2018, according to government statistics. Philippe said that represents an increase of 22% compared with 2017.

Aid workers say an increasingly backlogged and  convoluted asylum system has left migrants vulnerable, waiting on the streets for weeks or even years.

Near the Porte de la Chapelle in northern Paris, migrants line up each morning for a plastic cup of coffee, bread, and, for some, news about their asylum applications.

Mohammed Jan, a Pakistani asylum seeker who arrived in France last month, has been sleeping in a park while his wife seeks treatment for a medical condition. He said he struggles to find decent food and often awakens to mice and rain seeping through cracks in his tent.

“My eyes see France, but my mind does not accept France,” he said. “I’m afraid.”

Inside the gilded chamber of France’s National Assembly, lawmakers debated how the country should treat immigrants like Jan.

Improving the welcome for new arrivals means improving their integration.

France, he said “must not be more or less attractive than its neighbors … We must face reality, without any taboo, methodically, without renouncing any of our principles.”

Ministers stressed that 30% of asylum seekers in France previously applied for asylum elsewhere in Europe — meaning that France should not bear responsibility for them, according to an EU accord. /gsg