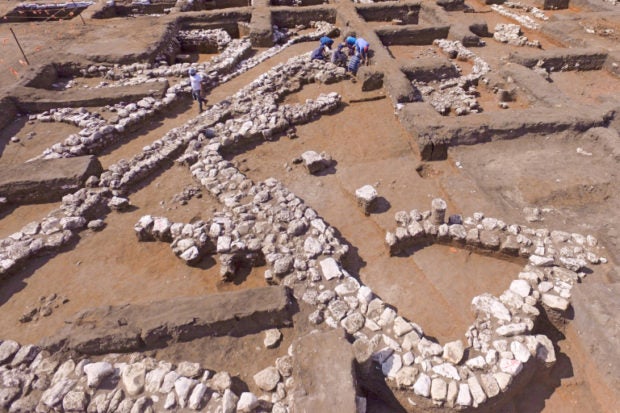 Israeli archaeologists work at the ancient site of En Esur (Ein Asawir) where a 5000-year-old city was uncovered, near the Israeli town of Harish on Oct. 6, 2019; archaeologists from the Israel Antiquities Authority said the excavations carried out over the course of two and a half years revealed a city among the biggest from its era in the region, including fortifications, a ritual temple and a cemetery. Image: AFP/Jack Guez

Israeli archaeologists on Sunday unveiled the remains of a 5,000-year-old city they said was among the biggest from its era in the region, including fortifications, a ritual temple and a cemetery.

“We have here an immense urban construction, planned with streets that separate neighborhoods and public spaces,” Yitzhak Paz of the Israel Antiquities Authority told AFP at the site near the Mediterranean in the country’s centre.

He called it a major discovery in the region from the Bronze Age.

The archaeological site known as En Esur “is the largest site and the most important from that era” in the region, said Itai Elad, another archaeologist overseeing the excavation.

A ritual temple was found within the ancient city along with rare figurines with human and animal faces, they said.

It also included burnt animal bones in a stone basin that they called proof of sacrificial offerings.

The excavation allowed for an older settlement from some 7,000 years ago from the Chalcolithic period to be uncovered as well, though smaller than the other discovery.

Paz said the ancient city was the “first steps in the process of urbanisation” in what was Canaan at the time.

Dina Shalem, another of the archaeologists, noted it included fortifications some 20 meters long and 2 meters high as well as a cemetery.

Around four million fragments were found at the site, including pieces of pottery, flint tools and vases of stone and basalt, said Elad.

Some of the tools came from Egypt, the archaeologists said.

Standing before a wooden table where some of the findings were displayed, Elad showed some of the more impressive of the fragments, including a club that could have been used as a weapon.

“Thousands of people lived here from agriculture and commerce,” said Paz, with estimates putting the number at between 5,000 and 6,000.

He said the site was abandoned in the third century BC for unknown reasons.

The excavations carried out over the course of two and a half years included the participation of 5,000 teenagers and volunteers.

The dig preceded the construction of a road in the area, a project whose plans were modified to preserve the site. JB

Read Next
Philippines to get ‘airborne command post’ based on future jet
EDITORS' PICK
Get exciting deals and discounts when you download the new McDonald’s App
‘House of Kobe’ launched in Valenzuela City hours before hoops star’s death
In appreciation: Kobe Bryant, a life defined by hard work
4 Ways Jollibee’s new store will serve a leveled-up kind of joy to Filipinos in the South
SM continues to send relief assistance to remote towns in Batangas
DOH warns vs eating raw meat, exotic animals amid coronavirus outbreak
MOST READ
College baseball coach, wife and daughter die in crash that killed Kobe
Kobe Bryant’s daughter Gianna also killed in crash
Kobe Bryant’s helicopter flew in fog that grounded other choppers
Hunt out for man caught ‘defecating’ in Intramuros
Don't miss out on the latest news and information.