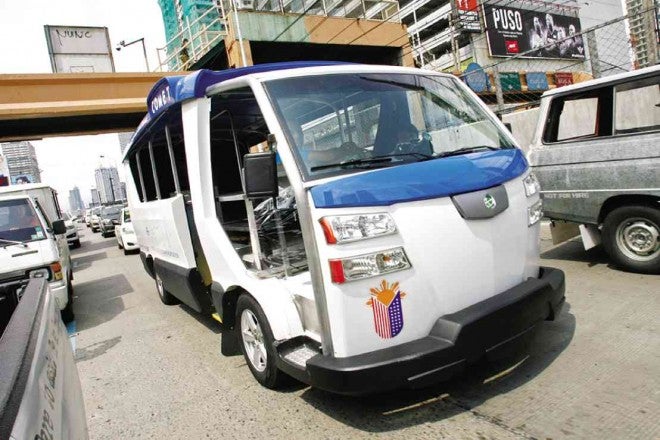 COMETS or City Optimized Managed Electric Transport vehicles will soon be streaking along some Metro roads in July as they ferry passengers from Naia Terminal 3 to Pasay, Makati or Taguig. RAFFY LERMA

MANILA, Philippines – The steady, sustained shift in vehicle choice and usage from traditional to electric vehicles (e-vehicles) is estimated to generate over 13 million jobs, the Board of Investments (BOI) said Monday.

During a hearing on proposed measures for the development and use of electric vehicles in the Senate, BOI Director for Manufacturing Industries Service Evariste Cagatan said that local manufacturers of e-vehicles and spare parts will generate over seven million jobs while manufacturers of plugged-in hybrid vehicles will open up over six million jobs.

Currently, there 54 firms engaged in e-vehicle manufacturing, 11 manufacturers of parts and components and 18 traders in the Philippines, Cagatan added.

She explained that the BOI is extending incentives to manufacturers to further encourage them to produce e-vehicles and spare parts.

“What we have been harping on since the last Congress was that we wanted BOI to be tasked to craft an electric vehicle incentive strategic program that will provide a comprehensive fiscal and non-fiscal support to enable the shift from traditional motor vehicle industry to electric vehicles and jumpstart domestic manufacturing of e-vehicles and e-vehicles parts and the building of charging infrastructure,” Cagatan said.

She added that the BOI’s proposed program will “narrow the cost between the e-vehicle and conventional vehicles, attract investments, establishment of testing facilities and production of charging facilities.”

The BOI would also like the proposed measures to include research and development and human resource development “to ensure a competitive and sustainable system in the e-vehicle industry.”