Storytelling sessions ‘gone to the dogs’ 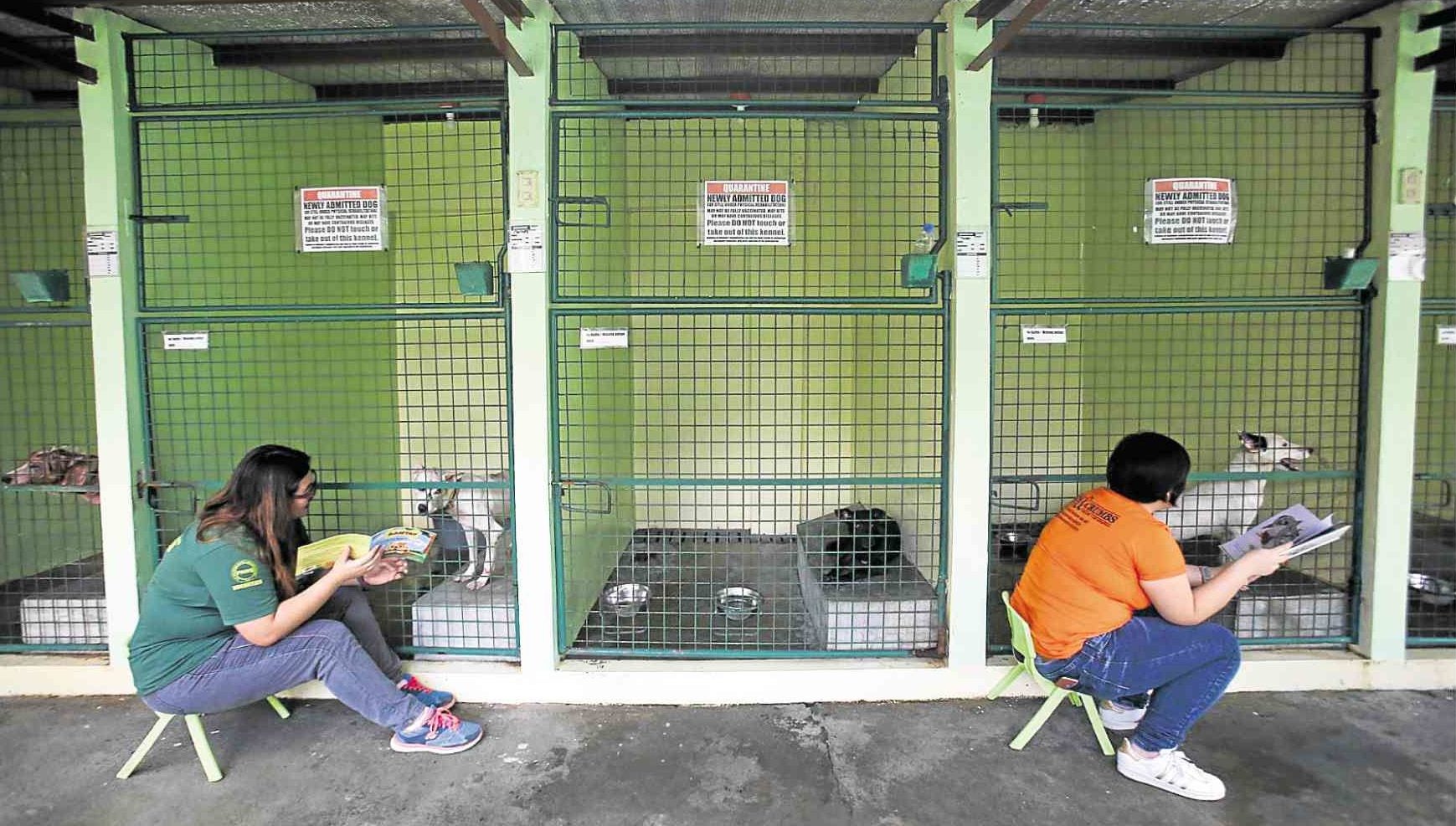 CAPTIVE AUDIENCE Rescued “aspin” (short for “asong Pinoy,” or mongrel) rest in their kennels as volunteers of the Philippine Animal Welfare Society read aloud to them. —LYN RILLON

On Friday, however, a peculiar serenity pervaded the area.

Seated on kiddie chairs in front of the kennels, volunteers read children’s books to dogs and cats of all stripes (and spots) as part of the shelter’s newly launched Project CALM (Comforting Animals through Literacy Movement).

The project is the first of its kind in the Philippines, said PAWS executive director Anna Cabrera.

The reading sessions are meant to slowly condition the “traumatized” animals to the presence of people, and such interactions at this early stage of the project are already showing promising results, Cabrera told the Inquirer.

“If there’s a category of the loneliest animals in the shelter, it would be the dogs and cats in quarantine,” she said. “But when they were read to, they calmed down. It’s like magic.”

The animals were rescued from cruelty and neglect, often at the hands of owners against whom PAWS has filed criminal charges.

At the shelter, the dogs and cats are first placed in quarantine before they are allowed to mingle with others. This part of the rehab process — which can last for months—is necessary for them to be checked for any disease, treated for injuries, or prepared for vaccination.

“We noticed that once they were physically OK, it still took a while for them to adjust when we put them in the common area,” said PAWS education officer Sharon Yap. “So we wanted to start the emotional rehabilitation together with the physical.”

Volunteers try to win the trust of aggressive dogs by sitting beside their kennels and simply talking to them. The mere sound of the human voice can be very soothing to their ears and helps communicate to the animals that not all humans are out to harm them, she added.

“These cats and dogs have become distrustful of humans,” Yap said, and the reading sessions “get them used to the idea of people and that people can sit right in front of them and they won’t be hurt.”

So far, the project has tapped only active PAWS volunteers, who must undergo training before they can deal with the animals in quarantine. Yap said they hope to get more participants, including children.

If one wishes to hone his or her oral reading or public speaking skills before a “nonjudgmental” audience, here is one way to practice, she added.

If the first few sessions were any indication, the read-alongs appear to be already doing wonders for the roughly 15 dogs and 100 cats in quarantine.

From showing signs of fear or aggression—either by snarling or retreating to the back of their cages—“they grew very quiet,” said Yap, with some even extending a front leg in an effort to touch the reader or inching closer and looking curiously at the book being read.

Cabrera recalled a scene that moved her most: That of a volunteer who read a story fittingly titled “Yehey, May Pamilya Na Ring Mag Aaruga sa Akin!” (Hurray, There’s a Family Who’ll Take Care of Me!).

“If we read to them daily, they see not all humans are bad,” Yap said. “This builds their confidence in approaching other people, making them more adoptable.”

Read Next
Magalong: Lying is hard; you have to keep rehearsing
EDITORS' PICK
PH poverty incidence rises to 18.1% in 2021; 19.99 million Filipinos considered poor
‘Thought control’: Books in Filipino fall victims to terror law’s folly
A laptop that maximizes your WiFi so you can maximize your productivity
House energy committee chair Arroyo bats for cheap electricity
Davao City is among PH’s ‘shining beacons of progress’ — Bongbong Marcos
Powered by style, innovation and passion
MOST READ
Alodia Gosiengfiao states in gaming language: ‘Maraming bawal na pala ang to sleep with other girls’
Andi Eigenmann, family tick off France from bucket list: ‘We finally made it!’
Aiko Melendez’s son Andre on dad Jomari Yllana: ‘Nasanay na ako na wala siya’
Youth rep: With rampant red-tagging, Jose Rizal would have been enemy of state today
Don't miss out on the latest news and information.