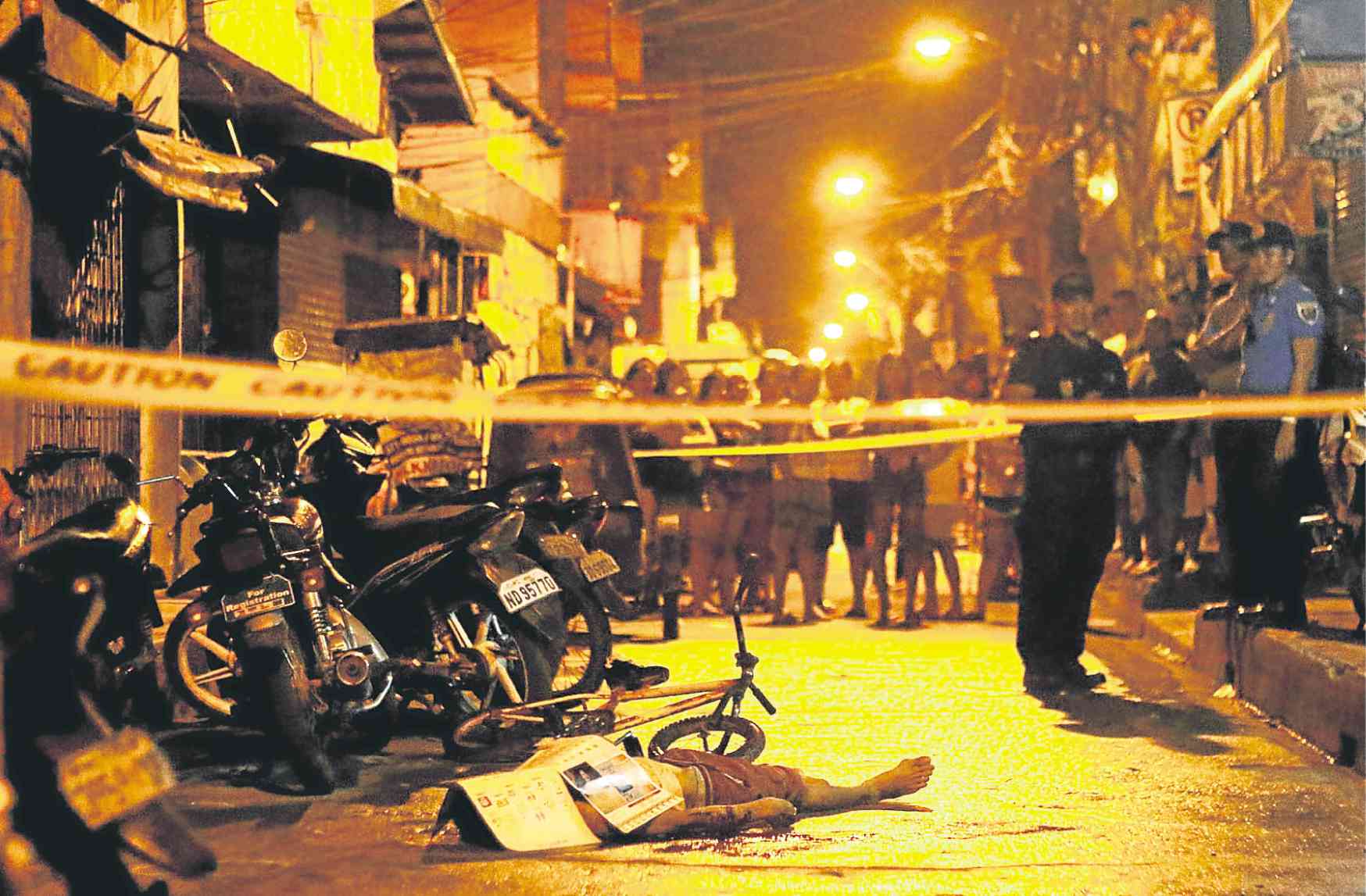 ANOTHER DRUG WAR STATISTIC In this 2017 file photo, policemen stand guard over the body of another drug suspect shot dead by gunmen on a motorcycle in Pasig City. Thousands have been summarily killed in the Duterte government’s war on drugs since the President took office in 2016. —INQUIRER PHOTO

President Rodrigo Duterte is now the lone respondent in a complaint filed in the International Criminal Court (ICC) against his brutal, three-year-old war on drugs, according to the lawyers’ group pushing the case.

The National Union of Peoples’ Lawyers (NUPL) on Friday said it had also assisted in the submission of new evidence against the President.

“We have narrowed down the respondent to one: Duterte,” said lawyer Krissy Conti of the NUPL, adding that the President would henceforth be considered in the complaint as the ultimate mastermind of the campaign that has claimed thousands of lives.

But Conti said the group was not discounting the possibility that the ICC would still include other ranking officials, such as former Philippine National Police chief and now Sen. Ronald “Bato” dela Rosa.

“There were other cases before [where the] right-hand man, usually police or military, [is] also implicated,” Conti said in an interview.

With NUPL’s assistance, families who have lost loved ones in the police crackdown on drugs had also submitted additional evidence to the ICC against Mr. Duterte.

On Thursday, they filed a supplemental pleading addressed to ICC Prosecutor Fatou Bensouda in a bid to bolster their case, which accuses the President of committing crimes against humanity.

The seven women are pursuing the case as members of Rise Up, a Church-backed group critical of the drug war and extending aid to the grieving families.

Together with the documents  submitted by the group to the ICC in August 2018, which was followed by a supplemental motion two months later, the new evidence should be enough to support “a guilty verdict,” Conti said.

In the 16-page pleading filed on Oct. 3, Rise Up also pointed the ICC to an alleged government conspiracy to “deflate” and “manipulate” the number of people killed in antidrug operations since Duterte came to power.

Rise Up noted that on June 18, the PNP announced that the number of deaths in drug-related police operations had risen to 6,600.

“We allege that the PNP manipulated the numbers, definitions and categorizations of deaths in their attempt to shield the perpetrators and cover up the actual number of deaths,” the pleading said.

The group also cited at least 74 minors among those killed in police operations.

Rise Up also submitted as evidence the documentary titled “On the President’s Orders,” a film project of American network PBS. The pleading said the film contained self-incriminating interviews with police officers in Caloocan City, a notorious battlefield in the drug war.

“[It is] arguably a fair-minded report on police operations, with interviews from both sides of the conflict,” it said of the film, which had its Philippine premiere on Sept. 20.

Read Next
BuCor chief sacks 300 guards; Baloyo detained
EDITORS' PICK
Singapore confirms first case of novel coronavirus
SM continues to send relief assistance to remote towns in Batangas
Timeless Elegance in the Philippines’ Most Distinguished Home Kitchens
Group slams Duterte: Terminate VFA because of sovereignty issues, not because of Bato
Beyond water service: Maynilad builds massive infrastructure projects to clean up Metro Manila waterways
Bato on ending VFA with US: ‘I don’t deserve this bargain but it’s not all about me’
MOST READ
Part of Aurora Boulevard in Cubao closed from Jan. 25 – Feb. 1
Duterte to decline invitation to attend US-Asean summit
Sam Heughan on turning 40, new ‘Outlander’ season, playing Paul Newman in film
Duterte threatens to scrap VFA if US doesn’t rectify Bato’s visa cancellation
Don't miss out on the latest news and information.